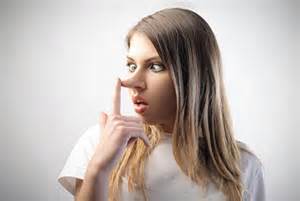 So, the last time I wrote, I lied. Well, I didn't lie exactly. I don't know what you call it when it's unintentional. An untruth? I was misinformed?

Look, I'll just come out with it. The last time I wrote, I said that Conor only really identifies two emotions: happy and sad. While these are the emotions that I know he can correctly identify and express, I now think we can add 'scared' to that list.

I know this because my husband raised his voice to our typical son, Aidan, the other day, and Conor became quite flustered.

"Why is Daddy yelling?" Conor asked.

"I'm sorry, I didn't mean to yell," my husband apologized. "How did that make you feel, when Daddy yelled?"

"Scared," Conor answered, looking furtively at his younger brother who was sulking at the kitchen table. (Aidan certainly didn't look scared. More like pissed off.)

Now, don't be all judge-y about the yelling, like Oprah or something. None of us are cyborgs over here. It had been a long day, and Aidan screwed up as 11 year-old kids sometimes do. I know it's all rainbows and ice cream where you live, but over here we just have a lot of pickles sometimes. (That makes no kind of sense, but you know what I mean.)

Anyway, I digress. So. We now know Conor identifies and expresses 3 emotions--happy, sad, and scared. On occasion, Conor will say he's disappointed. But does he really know what that means?


Or is Conor simply parroting back words we've said so many times?

Let's be honest. With me for a mom, Conor has become well acquainted with the concept of 'disappointment'. So it's possible he really understands it.

In my defense, I blame Kai-Lan. See, that little twit made a seven level sand castle in one of her episodes that I simply could not replicate on our vacation last year.

Needless to say, Conor was a little disappointed.

Stupid-ass Kai-Lan, I muttered under my breath as I desperately tried to build a tower in the too-dry sand.

"Oh Conor, you must be so disappointed that Mommy has no idea how to build you a seven level sand castle, " I said to him. I felt great shame. But seriously, who can keep up with a cartoon? I have enough trouble keeping up with the SuperMoms on Pinterest.

Really, it ruined his entire beach vacation last year, my utter incompetence in sand sculpture. I can dig my toes in the sand, but that's the extent of my sand-based talents.

And that's just one example. I have a million more. Brick walls don't open up to a magical train to take you to Hogwarts, no matter how hard you ram the shopping cart into them. (True story.) I tried to make it happen for you, Conor, really I did, but I'm no Molly Weasley. And no matter how hard I try, I can't make the Target discount gingerbread kit look like the picture on the box. It ain't happenin'.

The gist of it is that although Conor will say he's disappointed, I'm not sure if he's accurately identifying his emotion (he's usually quite upset at the time) or if he's just parroting back what I've said to him many, many, many times. Seriously, I've screwed up more than once, as hard as that is to imagine. Each time, I tell him how disappointed he must feel.

Thus, in the interest of trying to teach Conor how to both identify and to express a fuller range of his emotions while finding constructive ways of coping with them (i.e. not throwing a mega-watt tantrum on the beach because your mom is an incompetent boob and not a cartoon preschooler that can build seven level sand castles), we've recently introduced a 5-point scale into Conor's behavioral protocol. (By we, I mean his behaviorist.)

This scale is based on The Incredible 5-Point Scale: The Significantly Improved and Expanded Second Edition by Kari Dunn Buron and Mitzi Curtis. Makes me kinda wonder how bad the first edition was if they had to significantly improve and expand it, but now I'm just being judge-y. Like Oprah and the yelling.

(Sorry for the poor quality, but my scanner is a cheap piece of crap. It really hampers my work, and I get poor marks for it on my performance reviews all the time.) 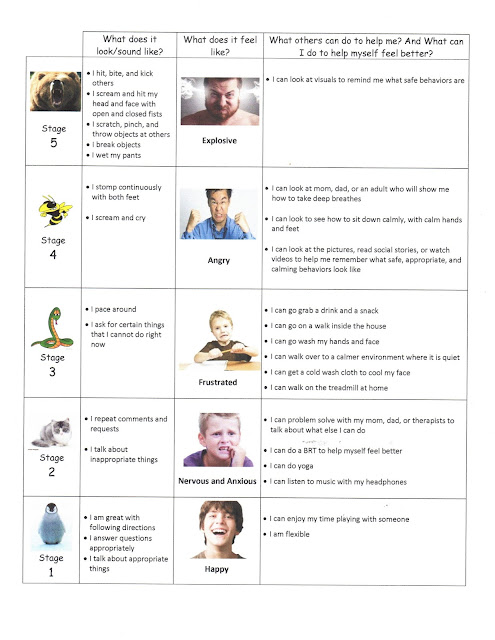 As you can see (with your reading glasses maybe), it matches a stage with an animal, a description of his behavior when he feels a certain way, a picture of someone demonstrating the emotion, and things that Conor can do to calm down.

Oh, and there is a caregiver guide as well. Just in case you don't figure out what to do by Conor's Tip Sheet.

(Again, apologies for the quality. I'm sorry, it's just that my OCD tendencies make me apologize too often when things are not perfect. I apologize for continuing to say I'm sorry. Sorry.) 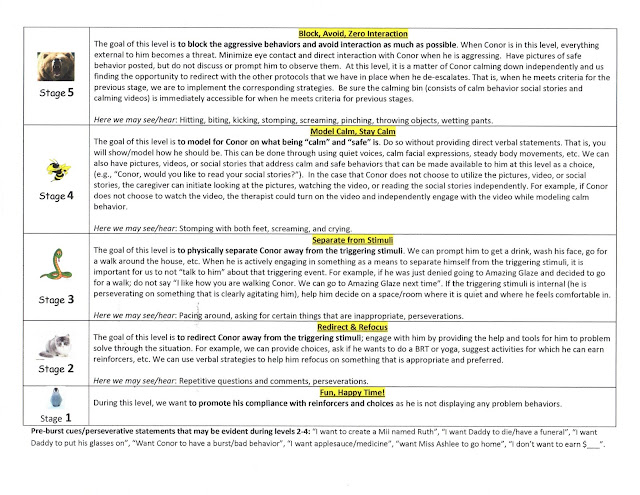 Anyway, our primary goal is to reduce the frequency of tantrums, of course, by first helping Conor to identify how he's feeling and then to master steps that he can do to calm himself. For example, getting a snack and a drink often calms Conor because he's prone to agitation when he's hungry. Doing yoga poses and relaxation techniques work like a charm, when you can get him to participate in them.

Our second goal is to reduce the number of "upsets" that he has. Currently, Conor has roughly 1.5 tantrums per month, a great reduction over the past two years. (Thank you, Kennedy Krieger NBU.) But the number of times that he almost has a burst (see Stage 4 above, the "bee"), is much more often. It's quite stressful.

I'm sorry, let me re-phrase that.
It's quite stressful.

So we're trying to catch him at Stage 2 or Stage 3. Heading it off at the pass, as it were. It's been helpful, actually. Not the miracle answer; just another tool in the tool box.

So there, that's it. My big confession. Conor can identify 3, maybe 4 emotions, not just 2 like I said before. So I lied (not intentionally, to be sure), so sue me.

Of course, there's a social story his behaviorist wrote to go with it all. And I'm secretly thrilled that I figured out, finally, how to get the slides in the movie to go slower. Yay me!

Posted by Alisa Rock at 4:22 PM No comments: