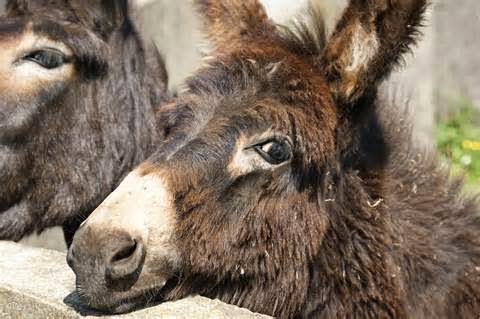 "Mom?" Conor called out in his new man/child baritone from the kitchen pantry around the corner. "Mom? What does a-s-s spell?"

"Excuse me, Conor, what was that?" I asked, bending over the open oven door. Hot air billowed over me as I took out Conor's lemon-flavored cupcakes. He's been cooking like a fiend lately.

"What did you say, babe?" I continued as I lifted the cupcake pans up onto the stove top, my hands encased in puffy, red, quilted oven mitts. Surely, I hadn't heard him right.

"What does a-s-s spell?" he repeated, coming around the corner to peer at me intensely. No, no smile on his face, he's not joking. He lifted his pointer finger for emphasis.

Quizzically, I cocked my head at him and parroted back, "what does a-s-s spell, Conor? What do you mean?" I felt the dread growing in my stomach. Dear Lord, first 'penis' and 'vagina' and now 'ass'? This teenage thing is getting more uncomfortable by the minute.

I thought about asking him to use it in a sentence, you know? To make sure I heard him right? But then he just would say, "What does a-s-s spell?" ('Cause it is in a sentence that way after all. Can't argue with that, I guess. Logical.)

"What does a-s-s spell?" he asked again.

"What do you mean? Did you see that somewhere?" I asked, trying to dodge the subject.

"Yes, here on the receipt for the vase you painted for Auntie Joyce," he replied, leading me back to the pantry. He means the one he painted, at the paint-your-own-pottery place during his earned community outing. "On the bulletin board." 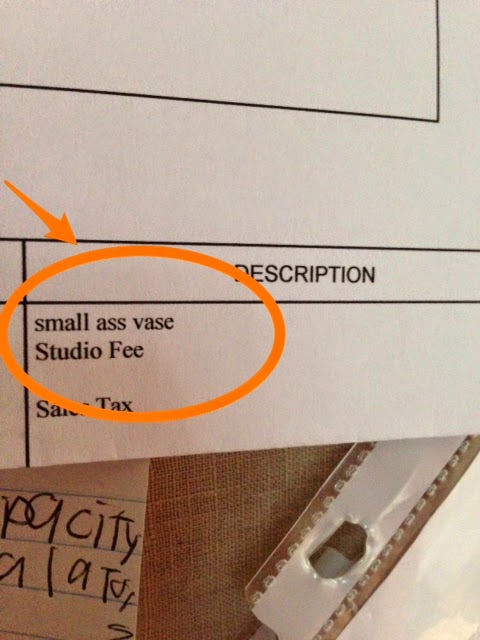 I muttered invectives under my breath. I'll admit it, my first thought was a disgruntled employee put this description into the computer. Like, look at this stupid, small ass vase this disabled kid picked out, and now I'm going to have to explain to Conor about the word 'ass', and what it means, and it's not just a donkey or something mommy yells at the other drivers on the road when they're being stupid, and then I'm going to have to talk to the owner of the business, and Conor's in there all the time, and it would be awkward, and I'd have to give them all the stink eye, and they'll hate me even though it's not my fault...

(I'm not melodramatic at all. I don't catastrophize events or anything. No, not at all.

Don't tell my therapist. She thinks I'm all better.)

"What up, guys," my husband said as he entered the kitchen. I thrust the receipt in his face.

"Conor wants to know what the word 'a-s-s' means," I replied, tapping the receipt. I pointed at the word for emphasis. "Right there."

"Well, I'm going to call them and ask," he chuckled. (Well, duh. He's so rational and non-melodramatic and stuff.)

Assorted, the employee who answered the phone said. Surely there was a period after the abbreviation ass?

"Um, no, there's no period," my husband explained to the employee on the phone. "And Conor had lots of questions." He hung up.

"Assorted, she said it stands for assorted, the vases come in all sorts of sizes," he told me, smiling. "There was a lot of laughter."

Ok, then, there you go. A-s-s means assorted, Conor.

You know, I can just hear his voice in my head when we go to the paint-your-own-pottery place next time--

Last night, Conor downloaded Mariah Carey's Dreamlover video. (Each Friday and Monday night, Conor is allowed to download a song or video of his choice as long as it's not marked "E" for Explicit by iTunes.)

Yeah, it may be sugary and quite a bit dated (albeit with some extremely fine looking young men dancing, not that I noticed or anything); a little old school perhaps, but his last video choice was The Black Eyed Pea's My Humps. (Which, to be fair, is probably considered old school itself these days.)

Now, don't get me wrong. I love The Black Eyed Peas, and My Humps...well, nothin' wrong with a little rump shakin' now and again. I've been known to shake my own booty a time or two, although the effect was quite disappointing given that I have a severe shortage of junk in my trunk.

But yes, I had my reservations about the My Humps video.  Yet, I did let him download it last week, as it fit the parameter of not being marked "Explicit." Besides, he has access to YouTube during his Treasure Chest times, and since we often use this half hour window to do frivolous things like go to the bathroom, start dinner, parent our typical kid, or throw laundry in the machine, he can be unsupervised long enough to check it out on his own if he really wants.

It's a tough call sometimes. Particularly since I'm not the most, well, strict parent. (You know the saying--when the going gets tough, give in. That's about right, isn't it?)

Look, Conor used to tell me what video he wanted to download ahead of time, so I was able to go on YouTube myself to scope it out. But then I'd get into a discussion with my husband about the video in question, we'd go 'round and 'round, and often it was just hard to make the call. Sure, Beyoncé might be dancing around in a skimpy costume (my boy loves Beyoncé), but it covers more than some women wear on the beach, so... is that ok? Or is it not? Is this word ok? That word ok? These lyrics? Those lyrics?

Then Conor started putting off his decision until it was actually time to download the song, and the gig was up.

And, of course, there's also the stark reality that my son is growing up. I can't complain about his compulsive Caillou watching on the one hand, and then turn around and complain about exposure to older, more mature themes. I mean, do I want him watching baby shows and listening to baby songs for the rest of his life? No. Most definitively, no.  He has friends, he listens to the radio, he navigates the Internet like a champ. I can't keep him in a bubble. At the same time, we're struggling to  address appropriate behavior and language, and it's uncomfortable and hard.

And finally, do I want to provoke a tantrum over a video that isn't downright explicit? If it's Friday night at 8:30pm, and we're tired and he's tired and I want the kids to go to bed so I can have a glass of wine and watch TV with my husband, do I risk a throw-down over some young women shakin' what they got?

And so, here we are. Trying to navigate a transition to adulthood for a young man with extreme social deficits and some significant behavioral challenges but also a very curious mind. I imagine we'll go down some dead-ends unintentionally, but hopefully we'll figure it out. Time will tell, I suppose.

In the meantime, I think all this means I'm going to have to write another social story if Conor starts going on about lovely lady lumps and bumps and humps. Which I really hope he doesn't do, since ain't nobody got time for that.

I Believe In You? 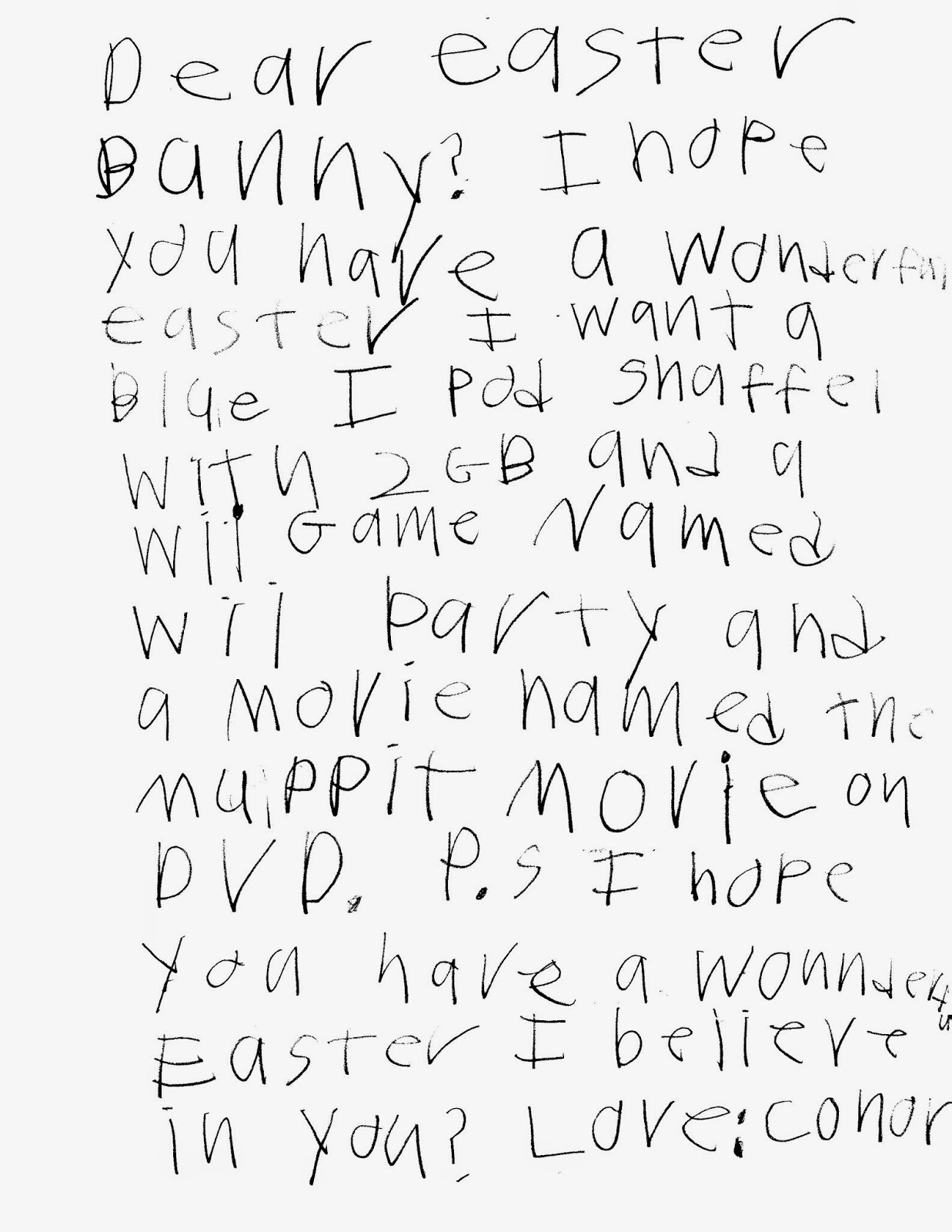