On Death and The Not Knowing

If I don’t get this out now, I may never write anything again. I can’t go around it or over it, I can only go through it. It’s what I’ve learned, these past 16 years raising Conor, my son with autism who inspires this blog. You plant your feet, square your shoulders, clench your jaw, and just keep moving forward.

You face it. Stare it down. Wrestle it. It’s the only way.

Hold on a second, though. Let me take a deep breath.

On Saturday, December 27th, at 2:30pm, my brother-in-law, Tom Palermo, was killed by a drunk, texting driver as he biked a mile from my home. (We live close to my sister, and Tom wasn't far into his ride.)

She struck him as he rode in the bike lane, and she left him to die on the side of the road as she drove drunkenly onward for miles, and then back, passing the scene yet again until she went home and called a friend. The friend told her to go back. She blew a .22 on the breathalyzer test, well above the .08 legal limit in my state. 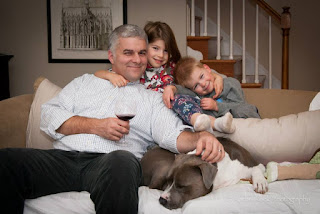 An avid cyclist and bike frame builder, Tom had been encouraged by my younger sister, Rachel, to enjoy the sunny, warm-for-December day, their kids happily playing with the Christmas toys they had received just two days earlier. (You can read more about it in this philly.com article.)

It’s hard to explain to your developmentally disabled teen how such a thing happens when you can’t really even understand it yourself. Words escape me. Usually I can figure out something to say, some black and white means of explaining the world to Conor—sometimes even a little white lie, truth be told--but this? I just can’t. For such a thing to happen…it makes no sense. Nine months later, it still makes no sense. Sometimes I look around even now and question myself, asking--wait, what just happened? It’s inexplicable.

It’s true, Conor knows that his Uncle Tom was in a bike accident and is gone. In the starkest of terms, he understands this. Over the years, he’s experienced loss—his Great-Grandma, his Grandpa. Emotionally, however, I’m not sure quite what is going on in his mind. Honestly, it may be years before we know. After all, he has trouble understanding and coping with his emotions on a typical day, with run-of-the-mill things.

His behavior deteriorated over the holiday break, yes, but it’s hard to piece out what was due to the traumatic event we experienced versus the usual behavioral challenges we face regularly over a protracted school break. Unstructured time is rarely good for my son, and the chaos and grief surrounding Tom’s death certainly meant my husband and I were less than capable in managing him or his schedule. Thankfully, his aids stepped in and tirelessly worked overtime. 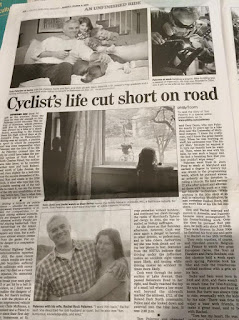 Only once or twice have I seen Conor actually, honestly trying to process the accident, to understand it. He likes to ride his bike, you know? We usually stick to trails but sometimes we ride on the street. Because of his disability, we’ve insistently tried to instill safety rules with him since it’s not uncommon for individuals on the spectrum to have no sense of danger. Stay to the right, wear a helmet, stop at crosswalks, ring your bell to alert other riders and joggers, watch for cars.

“Uncle Tom made a mistake,” Conor blurted out one day in March, looking at me piercingly as we drove down the highway on spring break. We had taken him to Florida, a promised reward for good behavior on our Christmas vacation. The Christmas vacation we cut short to rush home to be with family after Tom’s death.

“No, Conor,” I replied emphatically, staring at the flat road ahead. “Uncle Tom did not make a mistake. The driver made a mistake.” I could tell he wanted some assurance that he’d be safe when he rode his bike.

I glanced quickly at him. “Uncle Tom had an accident, he made a mistake,” he repeated, still looking at me. His eye contact, usually so nonexistent, was intense.

“No, Conor, no,” I said. “The driver made a mistake. Not Uncle Tom. Uncle Tom did everything the way he was supposed to.”

“The driver didn’t make a back up plan. The driver was not paying attention, and she made a mistake,” he continued.

He repeats things, you know. Constantly. Rules, lessons learned, protocols, dates of when he had tantrums, and so on. Constantly repeating. It soothes him sometimes; other times, it agitates him. It reinforces the protocols; it brings up past hurts and transgressions. There seems to be no rhyme or reason. Sometimes we can use it to reinforce behaviors and learning, but other times it serves only to work him up more and so we ignore it or try to redirect him. It’s a complicated dance between us.

This consistent talk about Tom and the accident, though important for Conor, just stabs at me. It still hurts. I guess it always will.

We didn’t take him to the funeral. I couldn’t stand the thought of him disrupting the service, and it only would’ve contributed to unpredictable behavior. We took him to his Great-Grandmother’s funeral; he was so young and so involved in his autism. We didn’t think it would affect him.

We were wrong. Our mistake wasn’t immediately evident. It took a few years, but then, when he became upset, Conor would say he wished his father would die. It was clear that he didn’t really want his dad to die. He just wanted him to leave him alone and let him do what he wanted. But still.

After his grandfather’s funeral three years ago, not long after his discharge from his third hospitalization, Conor continued to say he wished his father would die when he was upset. Or agitated. When he’s angry, he says it to be hurtful.

Then, he started just randomly saying it. He came up with new and inventive ways to say it, too.

“Mom?” he might say in his singsong voice. “Mom? I want Paisley to come stay with Conor, Mommy, and Aidan in July.” Paisley is an aid that stays with us sometimes when my husband travels. She’s been with us for four years, a rare consistency for autism families.

“Why, honey, why do you want Paisley to come in July?” I might reply, not knowing what was coming.

“Because Daddy is going to have a funeral in July,” he might calmly reply.

He’s been doing this for years now. I’m supposed to ignore it, to redirect the conversation. Sometimes it works. Sometimes it doesn’t. Sometimes, I'm so exhausted or angry that I just don't care, and I give him a dirty look. Which is not ignoring it, mind you, but I’m only human. I have learned not to respond with words or conversation. It only escalates his behavior, particularly if he’s already agitated.

Last year, for a long period of time, Conor would say he wanted Paisley’s fiancé to die and then dissolve in peals of laughter. Or he’d say it and start escalating. But mostly…he giggles.

“Paisley is going to be crying because Don died,” he might giggle as he shovels sweet potato in his mouth.

“Eat your dinner, Conor,” I reply, gritting my teeth.

He still says it, but with less frequency because we’ve been ignoring it. And maybe because she actually married the guy. Except now? Now, Conor adds “in a bike accident” at the end. This is particularly painful in a family gathering with my newly widowed sister and her two young children. I know she understands, deep down, because she’s heard his comments about my husband before. But it can’t be easy to hear. And their kids? They're 7 and 5 years old. If they hear that? I don't know what I'd do. We've been lucky so far.

I wished that it helped to sit down and talk to him about it, about death and loss and coping. Talk to him like I talk to my typical child. With all my heart, I do. We’ve tried and tried. But it doesn’t help. It just seems to egg him on when he thinks it’s funny (such as the case with Paisley’s Don) or to escalate his behavior when it’s a signal he’s angry about something denied (like with his dad).

Honestly, we’re still also trying to figure out if its his Tourette’s Syndrome (yelling out inappropriate comments involuntarily is a symptom) or purposeful. I guess if it were purposeful, it would be better since we could target it behaviorally. His aids think it’s purposeful. The smiling, the giggling. Yelling it at us when he’s agitated. But if it were the Tourette’s…well, he couldn’t help it, I guess, and it would be hard, but at least I wouldn’t think he was a bastard for saying it. It's hard to think that about your child, especially one with a disability. But it's such a hurtful thing for him to say. I struggle with it.

At the end of the day, I think it’s purposeful. If I were a gambling woman, I would bet money on it. Is he saying it for attention? To express his loss? To soothe a compulsion? Because he honestly thinks it’s funny? To be hurtful? All of the above? None of the above? I don’t know, and that, in itself, is one of the incredibly difficult parts of raising my son with autism. The not knowing.

We really, really miss you, Tom. Wish you were here.