"It's November!" The Chef exclaims as he rushes in the door, the wind gusting around him as his 1:1 aid trails close behind. "I want to talk to Mom. Mom! MOM! IT'S NOVEMBER!"

"Yes, it's November, Conor," I mutter. He whooshes by me to throw his backpack in his cubby. I sigh. My 17 year-old son with autism and mild intellectual disability pronounces that it's November almost daily, several times a day because, well, it IS November after all. And he's been waiting since Labor Day to talk about, and plan for, the Christmas holiday.

I put the kibosh on the pre-Halloween Christmas talk a few years ago. Other than one of my aunts--who is prone to finishing her holiday shopping in July, good Lord--Conor is the one person that I've met that loves Christmas more than Santa and his seven dwarfs. (Wait, that's Snow White, isn't it? The dwarfs? Elves? Toddlers? Whatever.)  If it were up to him, we'd start planning Christmas on December 26th every year.

Now, if you know me (and you probably do because only my family and the people my mother pays to read my blog posts will see this, I'm sure), you know that I like to be organized. Not in a "I'll-cut-you-if-the-sugar bowl-is-out-of-place" kind of way, but more like "if-I-have-to-look-for-your-car-keys-one-more-time-I'll-scream" kind of way.

Ok, fine, I have three label makers, but I swear I'm not obsessive about it. I just, um, label stuff. And I may have highlighted whole paragraphs of The Life-Changing Magic of Tidying Up: The Japanese Art of Decluttering and Organizing by Marie Kondo. Or not.

So believe me, if it worked for us, I'd love to have Conor organize his Christmas way in advance. Being organized helps manage his anxiety, his expectations, and, thus, his behavior. The autism trifecta. We make lists and calendars, visual reminders and travel trackers, social stories to explain things (everything, really). And we even have an inventory of his unpainted pottery items. (Don't ask. Long story. I practically need supply chain management software to keep track of all the pottery.)

But when it comes to Christmas, my son is like a balloon. He can start out quietly, calmly asking about making a list or trying to talk about what he wants for Christmas. Discuss who is going to be at my parents' house on Christmas Eve and what he'll do the next day. It may be July, but ok.

In the past, I have acquiesced and let him dictate a list for me to send to Santa Claus and his 27 Garden Gnomes in July. And that would be the end of that, you might think. 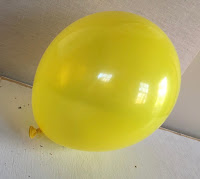 Oh no, my pretty. That's not the end of that. Because that list then starts to fill this Conor balloon with air. He doesn't want to wait until December to get his gifts or to buy gifts for us. Waiting is hard. So hard.

And that list--it puffs and puffs, and it blows the Conor balloon up until it's bursting and ready to pop. It fills that balloon with what I call "exciety", where he's just so excited about Christmas day and what it might bring that it creates a tremendous amount of anxiety because it has to be just the way he's thought it to be.

(By the way, I've just come up with that term 'exciety', and I am so calling my attorney in the morning to trademark it. I'm going to make a fortune, I just know it.)

Oh, and the next thing you know, you're facing a 17 year-old man/child having not just a cow but a whole herd because you won't buy him the $300 18,000 piece Ravensberger puzzle he asked Santa Claus and his 56 Toddlers for, and it's only the day after Labor Day.

So that's why I make him wait until November to even talk about Christmas. It makes for a long holiday season if your kid's level of exciety about Christmas is just as high on the Fourth of July as it is at Thanksgiving. It keeps you on pins and needles. And we all know that pins and needles aren't good for balloons.

For too many years, my kid's Christmas balloon has popped, leaving him, us, and everyone around us exhausted, limp, and deflated. Kind of like this condom I found left in the leaves below the oak trees that line the street in front of our house.

Come to think of it, pins and needles aren't great for condoms either.

Will Smith's Gettin' Jiggy With It