Grease Is The Word 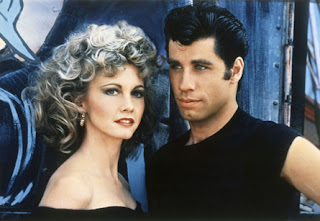 “Mom, why does Conor hate me?” Aidan asked quietly after Conor had a particularly bad tantrum last year.  I could hear the hurt in his voice.

Conor would often target his little brother with aggression.  Aidan, on the other hand, used to say Conor was his best friend.

“He doesn’t hate you, sweetheart,” I assured him. “It’s just… he’s just going through a hard time right now.  He loves you.”

“Because he’s your brother, honey,” I replied.  “He just can’t tell you that.  But I know he does love you.”

Then I would regale him with stories about how my older sister and I would fight when we were young.  How we struggled to get along growing up, but that we became friends as adults.

I told Aidan that once, when I was not much older than he is now, Aunt Nanci took my Grease record, took it out of the sleeve, and put it under the living room rug so it got scratched and unplayable. I swear she did it just to be mean, but she maintains that I listened to the record obsessively, unceasingly, endlessly, and drove her to sheer, stark-raving madness.  (Who can listen to the Grease soundtrack too much?  I mean, Grease is the word. It’s got groove, it’s got meaning. Grease is the time, is the place, is the motion. Grease is the way we are feeling, for Pete’s sake.)


“That was really mean,” he replied.  I could tell he thought it was a little funny, too.

“Yes, it was,” I said, “And I’m sure I listened to the record too much.  But my point is that hopefully this tough time won’t be forever.  And you and Conor will become friends again.”

And then, at bedtime, I sang him the song I made up years ago, for both my boys, to know that they are loved, and that we belong together as a family.  (Aidan asks me to sing it every night when I put him to bed.)

To the tune of “Jesus Loves Me”.

That is the sweetest thing ever. You made me cry.