I've got my eyes on you 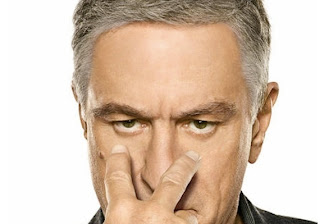 On New Year’s Eve, many, many years ago, we left Conor with our babysitter and went to a friend’s house for a part-ay.  (I’m raising the roof right now.  Whoop whoop.)

This was when Jim and I were still young and could stay up until past midnight.  (Now, we’re more apt to wake up when the midnight fireworks go off, yelping “What was that noise?” at each other.)

We got a frantic call from our babysitter.  A pipe had burst in the house and we needed to come home right away.  Fortunately for us, we found a plumber who made house calls even on holidays.

Let’s just say that the kind of gentleman that can come on a moment’s notice, past eleven on New Year's Eve, could possibly be a little, hmmm, odd.  In short order, this guy totally ignored me, hit on my babysitter hard, and started calling my husband “Boss Man”.

Seriously, it was like a bad sitcom skit.  “Whatever you say, Boss Man,” he would say to Jim, bobbing his head.  My husband stared at him like he had three eyes and a big booger hanging out of his nose.  Gloria and I just chuckled at each other. We still occasionally call Jim “Boss Man”.  (Never gets old.)

Jim may hate being called Boss Man, but he actually is a good boss. (I should know, he was my boss after all.  That’s how we met. I was his administrative assistant.  Scandalous.)

Me?  I hate supervising people.  It’s not one of my strengths.  Oh, I’ll do it if I have to, I can give a great annual review. I can do the technical part of the job. But I find it exhausting.

Now that we have help in the house, it’s great.  Except when it’s not.

I’m having a hard time figuring out if one of our instructors knows what she’s doing. She’s a little green, never having been an in-home therapist before.  That’s no reason to discount her abilities.  Plenty of the Clinical Assistants on the unit had never worked with kids with disabilities before and they did just fine.

It’s just, well… there’s so much at stake.  And I’m terrified of making a mistake.

I don’t want to continue with the wrong person and risk all the progress he’s made.  He can’t tell me if Miss Nancy is mean or nice, patient or short tempered, drunk, sober or hungover, whatever.

Nancy was hired by the service provider, so I didn’t get to interview her and they have a policy of not sharing resumes with parents. I did my own little interview in the car on the way to the toy store with Conor, though.  Of course I did, you betcha.

He can’t tell me, that’s the problem.

My own therapist would tell me that I’m “catastrophizing”. Catastrophizing is when you have irrational fears about events in life, usually imagining the worst possible outcome to an event, even when it is extremely unlikely. It can lead to anxiety. (Um, yeah, that’s me.)

I shouldn’t just assume the worst.  Nancy’s only been with Conor for two weeks, for heaven’s sake.  A learning curve gets pretty steep when THE MOM is hovering over you every second of the afternoon.  Did you give him the token at the right time?  Did he earn his iTouch?  Don't forget the Superstar token.  Did he poop yet? Put the toilet seat up?  Put the seat down?  Wash his hands? Turn out the light, I want him to learn to turn out the lights when he leaves the room?  (Seriously, I  wouldn't work for me.)

I’m not stuck with this person either.  If she doesn’t work out, we’ll find somebody new. It’s also nice that I’m not alone.  There’s my husband, of course, our case manager from the autism service provider, and the outpatient services provider from Kennedy Krieger Institute.  So obviously, it’s not just me watching what’s going on.

I’ll do it.  I will. I’ll try to stop wringing my hands and imagining the worst scenarios.  I’ll pretend I just took a Valium and chill out once in awhile.  I’ll spend lots of time with Miss Nancy so that I can see for myself how she interacts with Conor.  If something’s amiss, I hope I catch it. I'll be a good boss.

Your anxiety is not unfounded! Leaving a child with limited communication skills with others is scary and things do go wrong, and your child can't tell you. Oh, I could tell your stories that would make you want one of those valium! Use a good room monitor and GPS and drop in unexpectedly, often. I wish it were all in our heads, but it's not.
By the way, I like your writing style. It's funny : )

Thanks! I'm aiming for funny. At least, when Conor lets me be, based on his behavior. Overall, we've had positive experiences, but we're ever vigilant.

My name is Mrs.Aisha Mohamed, am a Citizen Of Qatar.Have you been looking for a loan?Do you need an urgent personal loan or business loan?contact Dr James Eric Finance Home he help me with a loan of $42,000 some days ago after been scammed of $2,800 from a woman claiming to been a loan lender but i thank God today that i got my loan worth $42,000.Feel free to contact the company for a genuine financial service. Email:(financialserviceoffer876@gmail.com) call/whats-App Contact Number +918929509036