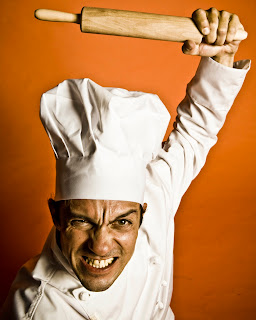 This morning, my son had 14.2grams of pretzels for breakfast.  I know this because he only ate an Utz snack bag of shaped pretzel snacks. Lightning McQueen shaped snacks, to be specific.
Food and Conor have had a tempestuous relationship.  As a baby, he was a pretty good eater, gobbling up vegetables, fruits, and various other items that come in baby food jars.  (Hey, at least I bought the organic stuff.)
I could never sell him on the pureed spaghetti and cheese, but really, who can blame him?
Then came the allergies to milk and eggs. (Oh, the distance the projectile vomit reached… it was like he was practicing for an Olympic barfing event. Gold medal contender. Just like that awesome scene in The Exorcist. Check it out, this was totally Conor.)
No worries, switched to soy milk and bought milk-free cookies.  It didn’t really alter his food choices that much. He's never liked eggs to begin with.
Then came the regression.  And with it began Conor’s very complicated relationship with food.
Basically, Conor eats two food groups: crunchy/salty and mushy/buttery.  Preferably of the carb variety. Not exactly "food pyramid" worthy.
Cross my heart, one time he ate sweet potato for dinner every night for a month.  That’s 30 days.  He turned orange.  It was like some sort of weird, bitchin’ tan.  (Hey, when you’re one of the whitest people on the planet, you take what you can get.)
Thankfully, I’ve kept him hooked on homemade spaghetti sauce, which has three vegetables—tomatoes (yes I know it’s technically a fruit, so kill me), zucchini, and carrots.  And garlic, garlic’s good for you, right?  And olives, that’s good, right, olive oil.  Very Mediterranean diet. Heart-healthy, I tell myself.
He doesn’t eat meat.  Something about it makes him gag.  So my kid was a vegan for a very, very long time.  No meat, no egg, no fish, no milk.  The dreadlocked moms that don’t wear deodorant at Whole Foods love me. The sausage eating red meat moms think Conor’s being a food snob.
Invariably, someone raises their eyebrows quite high and says “But what about protein, he’s not getting any protein.”  You know what lady? I tried to fight that fight.  Thousands of chickens needlessly died in my efforts to jam it down his throat.  But he’s not having it, nada, no way.  He doesn’t care if it’s fried, broiled, baked, grilled, marinated, pureed, or covered in chocolate, he is not eating it.
We used to really worry about it.  (Ok, I worried about it and my husband shrugged his shoulders.)  His teachers would tell me not to worry, most of what Conor ate was healthy enough and they knew kids who subsisted on French fries, corn chips and goldfish.
So here’s a quick sampling of food that Conor might eat on a good day.  He's outgrown the allergies.
On a bad day, he eats pretzels for breakfast. And lunch.  And dinner.
But you know what the really weird thing is?  Conor loves to cook.  He wants to be a chef when he grows up.  He will help me make a delectable Roast Pork Loin with Garlic and Fennel Seed with Roasted Fingerling Potatoes.
Just don’t even think he’s going to eat any.
Posted by Alisa Rock at 9:29 AM

Actually, that's not so bad (which is exactly what my pediatrician says when I tell her what my twins eat). Between sweet potatoes and peanut butter, he probably gets more nutrition than some American adults.

Just found your blog and I'm enjoying it.

I'm glad you're enjoying the blog! Yeah, I know it could be worse. ;-)