Do What I Say 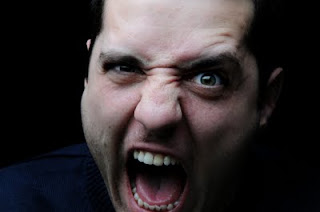 Tuesday afternoon, I visited the unit for parent training.  Any kind of training in the autism area makes me a little anxious, since I always feel waaaay over my head.
Sad to say, even after ten years of coping with my son's disorder, professionals can still give me the pre-test jitters.
I just don’t know what the hell I’m doing.
As I stood in the bedroom-turned-training-room, I thought I was going to pass out.  The room started swaying and I felt a little dizzy.  But when the ceiling started crackling, I realized I wasn’t having a panic attack.  It was the EARTHQUAKE OF 2011. (Insert screaming sounds here.)
This did not seem a propitious start to my training on Conor’s treatment protocol.
My pre-test jitters were not helped by the realization that a 23 year-old coed was going to be taking data on ME.  I guess they need this for insurance, I don’t know, that’s what I was told.
But it felt weird, having to go through this stilted training process with someone timing me, critiquing me, and making dashes on the page.  This young woman was probably thinking….

Who is this mom and why can’t she figure this out already?
The whole thing felt ♪awkward♪.
One working theory (not the main one): Conor may tantrum when you make demands on him. Not every single time, but enough that they want to address it.  So we practice the treatment for task avoidance.
The treatment for task avoidance?  Don’t let him avoid the task. He can tantrum all he wants, but by god, he’s going to do that task.
You WILL fold that towel, Conor.  FOLD IT.
Training consisted of me making demands on Polly, the therapist who was pretending to be Conor.
(For the record, I hate role play; I feel stupid. I may be a better actor than Steven Seagal, but that’s not saying much.)
If Polly did the task, I should say “Good job!” or “You’re awesome” or something along those lines.  If she didn’t, I would model the task.
“Here’s how you do it, sweetie,” I would say, doing the task.  “Like this.”
If Polly did the task, another “Good job!”  If she didn’t, I would put my hands on Polly’s hands and do hand-over-hand to complete the task.  All I could say was “Okay” after forcing her to do the task.
(Have I mentioned my aversion to touching someone that I don’t know really well?  I don’t know how massage therapists do it, all the touching and skin-to-skin contact with practical strangers.  Ew.)
No, wait, it gets better.  Since Conor may have (ahem) behaviors while trying to get out of the demand, I have to be trained in how to manage his challenging behaviors.
Thus, on Tuesday, I also learned the “stinky grip”.  It’s one of many grips, I guess. My one hand grips the meaty part of the forearm, the other grabs his shoulder with the thumb in his armpit (hence, the “stinky” part of the grip).  This is supposed to keep him facing away from me, while allowing me to try to re-direct him back to his chair.
Have I mentioned how much I don’t like touching people I don’t know?  Especially in their (ugh) armpit?  I think I mistakenly touched Polly’s boob as well, while she was flailing around in her pretend tantrum.
Yeah, I’m sure it was good for her, too.
Posted by Alisa Rock at 11:45 AM