No, the OTHER little blue pill 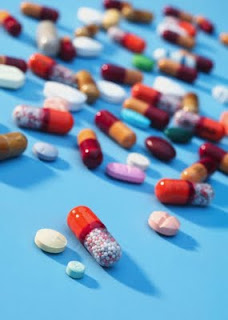 With all due respect to Dr. Temple Grandin and other self-advocates, when there is a pill to cure my son’s autism, I will shove that medicine down his throat so fast.  So fast.
And when he’s normal (we all know what normal is, people), when he’s finished college, and he’s got a job (however meager) and he’s fighting with his spouse and picking up poop from his dog in his own yard and his car is having mechanical trouble and he’s trying to figure out how he can afford Ravens tickets this year and he wants another loan, I will handle his anger over being cured.
I can handle that.  It’s this current state of affairs that I’m struggling with.
Posted by Alisa Rock at 7:25 PM

I hear you sista!

just got diagnosed with HSV1, and reading this actually made me feel like crawling and crying like a baby. The outbreak I have right now is genital and in my throat and mouth, I talked to the doctor who did the blood test on me and said over time that it would eventually get much better. She said that what I’m having is a massive outbreak and is unusual, but that it may be due to the fact that I stressed myself out over it so much. She also told me even though I have it in the genital area that It doesn't mean that I needed “private to private” contact to acquire it. But this did make me feel a whole lot better about the whole situation. For anyone else to have HSV1 after all this stress and pains am passing and the doctor saying all such of crap i was not convince by his Theory so i decided to go on the internet and saw this comments by Rose who testify about how she get cured by root and herbs by Dr AZUKA, when i first bump into it i didn't believe the comments at first so i decided to confront her on Facebook and really know what and how did it work because my doctor told me there is no cure for herpes, so i really contacted DR AZUKA, he responded in A minute the only thing he ever ask for was just the items of which he will use to prepare for the herbs, after all this he send the herbs through courier Services, within a week i was cure just like that without no struggle or stress, if you are out there in need of cure contact him with his email address: Dr.azukasolutionhome@gmail.com OR reach him on his mobile phone +2348132777335

thanks to Dr omohan, who cured me of Fallopian tube blockage and fibroid. i married for over 5 years without a child of my own. because of the problem with my Fallopian tube and fibroid, until i came in contact with Dr omohan testimony and recommendations online, on how he has cured and healed so many people of the same problem and i decided to contact him,and explane my situation to him,few days later he sent me some herbal portion which i took for 14 days, and i became pregnant after taking dr omohan herbal medicine in three months time. in casse you want to reach him for a similar problem, you can contact him on his email: dromohanherbalmedicine@gmail.com for advice and for his product or whatasp him +2348164816038

I want to share a testimony of how Dr UDI  herbal mixture cream saved me from shame and disgrace, my penis was a big problem to me as the size was really so embarrassing ,and i was also having weak erection problem i had so many relationship called off because of my situation, i have used so many product which i found online but none could offer me the help i searched for Which was very painful and then i saw some few testimonies about this herbal specialist called Dr UDI and decided to email him on so I gave his herbal product a try. i emailed him and he got back to me and we discussed, he gave me some comforting words and encouraged me also ans then gave me his herbal pills and cream for Penis Enlargement Within 1 week of it, i began to feel the enlargement of my penis, " and now it just 2 weeks of using his products my penis is about 10 inches longer and am so happy contact Dr UDI via (drudiherbalhome@gmail.com) Via whatapp +2348051243538 or view is website https://drudiblogaddress.blogspot.com/   https://drudiherba.home.blog:

i already gave up on ever getting cured of HSV2 because i have try many treatment none of them work out for me i have go to different hospital they always tell me same thing there is no cure for herpes when i came across a post about Dr ohunyom, in the net from a lady called Angela i contacted him and he reassured me with him herbal medicine which i took according to the way he instructed, that how i was cured. I doubted at first because i have been to a whole lot of reputable doctors, tried a lot of medicines but none was able to cure me. so i decided to listen to him and he commenced treatment, and under two weeks i was totally fee from #Herpes. i want to say a very big thank you to DR ohunyom for what he has done in my life. feel free to leave him a message on email drohunyom@gmail.com and also WhatsApp him +2349060579973..
He can still be able to help you with this herbs medicine:
1...ALS CURE/DIABETES CURE/EPILESY/HPV CURE/LUPUS/HEPATITIS/CANCER/GOUT