When Conor was a young seven years old, my younger sister became engaged. (Insert heavenly ♬ ♬ music here.♬♬ )  My mother was thrilled, since Rachel was getting up there in age.

I kid, I kid, we were thrilled she finally found a good guy, a real keeper.  (Oh vey, the guys she brought home, I could fill a book.)  Tom's great.

Most importantly, Grandma Middleton thought Tom was soooooo handsome. (That's why his picture graced the mantle above her fireplace. She tried to deny it, but it was true.)

A wedding!  Oh my! (Squeal of delight here.)

Ok, enough with the excitement and happy thoughts.  What affected me the most (and it is all about me, at least in MY blog), is that Rachel graciously offered to have all of her nieces and nephews in her wedding.  And Conor was most definitely invited to be in the wedding party. (That's three nieces and two nephews, by the way. Brave.)

I love my family.  They love and accept Conor, so much, so totally.

But still, at this point, we were well on the autism journey with Conor.  We knew what it meant to try to have a kid with autism in a wedding.  Or at the grocery store, for Pete's sake.  And we're not talking a wedding in the backyard of my parent's house.  It was a wedding, wedding.

Thankfully, my sister was no bridezilla.  But still, the stress, my god.  The tuxedo, the guests, my Mom's friends would be there. Need I say more?

I can tell you exactly how many hours I slept the night before. Seriously, I still remember.

I stayed up all night long, worrying and worrying about Conor.  Would he have a tantrum, would he walk down the aisle, would the tuxedo be too uncomfortable, how would I keep him from climbing the trellis of plants, would he sit quietly through the ceremony?  Could I get myself, and Conor, and his four year-old brother dressed and to the ceremony on time?  (The husband was on his own; he can usually dress himself.)

Smartly, I had hired a therapist to come with us, and she would follow him during the reception, but still... would Conor ruin the entire day?

Thankfully, my entire night of insomnia was in vain.  Conor did a wonderful job, walked up the aisle with his camera and his older cousins like a champ, and sat quietly through the entire ceremony.  I was shocked, thankful, and exhausted. Quite honestly, when I told my mother's second cousin that Conor had autism, she was surprised.  (Of course, she hadn't tried to have a conversation with him, but he did well.)

Unfortunately for me (and my husband), I spent the entire night before my sister's wedding worrying... about the wrong kid.  Apparently, my typical four year-old decided that he was going to be the one to act up at my sister's wedding.

Here is a picture of Aidan, who decided that he was too shy to participate fully in the wedding and this is the picture we get after threatening him with no TV for the rest of his natural life. 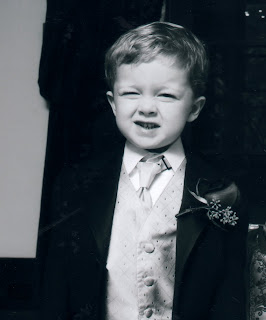 This is the good picture.  Grrrrrrr.
Posted by Alisa Rock at 8:57 PM

You are absolutely right. Anytime we are out - especially at a social event, or worse, a public setting, I worry, worry, worry. And 9 times out of 10, he behaves lovely - I can actually feel proud of him, and look forward to the next event. Thank goodness he saves his tantrums for me in the privacy of our home.

and the pictures are both lovely!

Awesome post, and extraordinary site. A debt of gratitude is in order for the data! chicas del este