This is what Conor's room looked like when he went into the unit. I feel like it accurately reflects the disorganization of his mind, and thus, the chaos of our lives. I'm not sure the pictures do it justice. It was a jumble of pictures, pottery, wall stickers, clocks, and knick knacks. 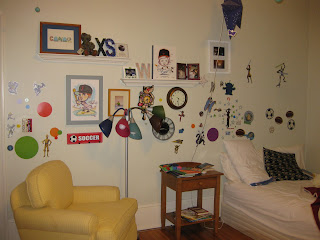 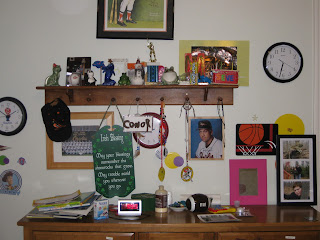 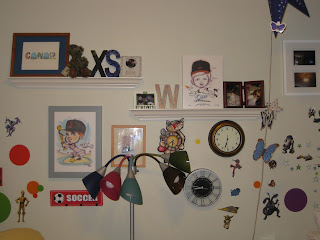 Can you see the autographed copy of Cal Ripkin Jr.'s picture in the middle one?  I've confiscated that for my office.

Since Conor's been on the unit, I've taken the opportunity to redecorate.  (Because that's what's important, what his room looks like. I'm rolling my eyes at myself.)  It helps me, though, to feel like we're starting fresh, anew, with a clean slate. No more holes in the wall, no more dents memoralizing past head bangs.

Here's what Conor's room looks like now.  (I should mention that red is Conor's favorite color.) 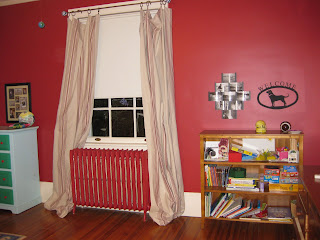 I tried to take out as much of the chaos as possible, while still maintaining Conor's favorite things.  His love of red, his Black Dog welcome sign, his beloved collage picture frames, his art therapy projects.  Love them.  He has the solar system hanging from his ceiling. 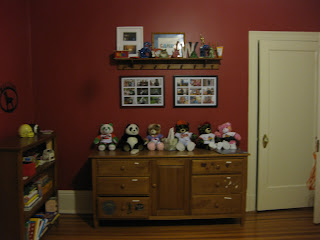 Quite a Build-A-Bear collection, eh?  I've put any pottery that he loves up high so he can't grab them and make them projectiles during the inevitable tantrum.  But he can still see them, and admire them, and know that they are still very much his. 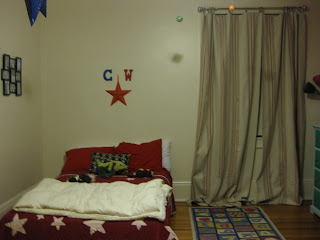 He wanted red walls, but I was afraid to paint all four such a vibrant color.  I'm not happy with the blah-ness of the beige walls, but I figure I can work on that later.  (Don't tell my husband.) Quite honestly, the red walls look great, it's the beige ones that need warming up. (Another project on the honey-do list, I guess.) 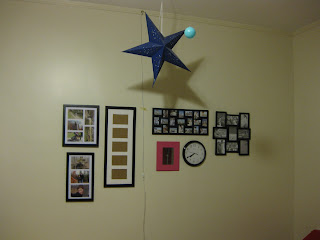 To help address the blah-ness, I've hung some of his treasured items.  A clock, a mirror he painted, collage picture frames yet to be filled, a light he insisted on keeping lighted all night.  I think that's Venus, the planet hanging there.

I'm hoping he won't notice the stickers are all gone.  (I can be strong, I know I can. Just say no, Alisa, just say no to replacing bad wall art stickers.)

I know it doesn't really matter what his bedroom looks like. Even though it makes me feel better emotionally, I know it's not important.  In the end, all that is important is that his behavior improves, he makes progress, and our lives become more functional, more manageable, more enjoyable.

Thanks! He loves his new room. Didn't bat an eye.