Conor came home four days ago, and that deserves its own post.  But we've been busy managing the transition, which has been significant for all of us. More about THAT later.

One of the biggest changes is the amount of structure that we now have to provide for Conor.  The unit scheduled activities down to the half hour.  Whew.

We quickly run out of ideas of how to entertain him, since he doesn't watch TV very much and he has to earn his time on his beloved screens (Wii, computer, DS, iPad, iTouch) with good behavior.

So, we've dreamed up this little black box of ideas. It's filled with index cards with activities, exercises, little outings and yes, even chores that we can do with Conor. 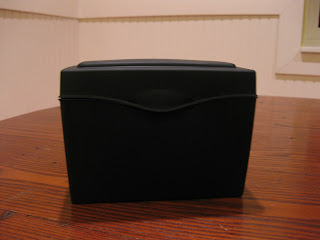 Yesterday, Conor chose "Make a video and put it on YouTube." I guess it sounded better than Set The Table, which I still made him do later. 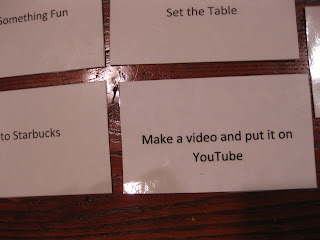 He wanted to talk about school.  Three days at school without a tantrum, whoo hoo!  Progress.

I started making videos with Conor and posting them on YouTube while Conor was on the NBU. My husband's extended family lives hundreds of miles away, and don't get to see Conor often. (Or any of the rest of us, for that matter.) So I started taking videos and posting them.

Here you go!  By the way, his behavior team gave him this awesome gingham shirt, together with a pile of other gifts.  So nice.