Because I Said So


We've spent the last week on "vacation" and supporting Conor while he was at sleep-away camp. A little hiatus, some time off.  Well, a little time off anyway. Enough of a break that I was able to read two really quite terrible books and get a migraine from too much sleep.

We rented a beautiful waterfront home about 10 miles away from the camp so that we could check-in every day and make sure he had his sweet potato and his protocol followed and take him on his earned community outing and see that the jock itch didn't get out of control and blah-dy blah blah.

You know, all those things we helicopter parents do.

I spent so much time preparing for camp, and then supporting him at camp, that I neglected some things on the home front.  Little things like bills and taxes and birthday gifts. And my hair.  My God, my hair is a complete and utter disaster. I look like a street woman pushing her cart.

In any case, we've declared sleep-away camp a success.  (If we say it, it must be so.)

He made a friend, a boy who loved shooting hoops in the searing 100 degree heat as much as he did.  A boy who didn't mind that Conor tackled him during a short-lived game of catch with a football.  A boy who talked Conor's ear off and hugged him in the swimming pool and held his hand as they wandered around.

We briefly adopted his 1:1, as we often do with the good ones, an affable chap from Plymouth, England, just out of university.  (He's British, so I can say "affable" and "chap" and "university." So awesome.)  We were so smitten with Ted, we had him over to the rental house on Friday and taught him how to pick Maryland blue crabs steamed with Old Bay.  Followed, of course, by a cold beer.

Conor rode a horse during a therapeutic session at a local farm. He looked right at home, tucked up in the saddle.  Poor Ted stepped in a pile of horse shit and spent some of the session trying to regain his dignity.

Don't judge.  It happens.  Everybody poops. Let's move on, then, shall we? 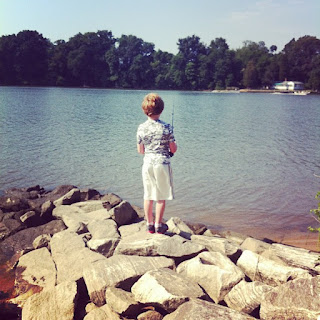 That's ok, though. It brought back memories of fishing with my Pop-Pop. I could gut and scale a fish by the time I was Aidan's age.  (Yeah, I got that going for me. Booya. Put that right on my resume.)

I finally taught him how to cut the worm and bait the hook himself, but I didn't dare ask him to grab the spiny fish and try to wiggle the barbed hook free.

A few fish lost their lives, but teach a man to fish and whatnot.  Circle of life and all.

So.  Conor made a friend.  He had a great 1:1. He got to ride a horse, and shoot hoops, do arts and crafts, navigate a ropes course complete with zip line, and swim in the pool.  He slept through the night and the rest of the family got some R&R.  We fished, I read, they golfed, I shopped.  We ate too much, didn't drink nearly enough, and we all survived.

Oh, but he did have a tantrum at camp.  But not until the second-to-last day.  Since he came home only one night early, I deem sleep-away camp as a success.  It is, because I said so.

That little getaway sounds like a slice of heaven! Right now I'd cut off an appendage to have a few days in a waterfront cabin, with the boy at a sleepaway camp. But alas, that's a dream for the future. And you found a new Brit friend, so that's a huge bonus (only to be outdone by finding a Scottish friend, IMHO).

Hope the rest of the summer goes as smoothly!

I agree with your assessment! Success!

I'm sorry, Mike Paul, I don't know what you mean by your comment? The post wasn't meant to address the autism epidemic (which I believe is real) but to tell the story of my son's sleep away camp experience.