Did Van Gogh's Mother Have To Put Up With This? 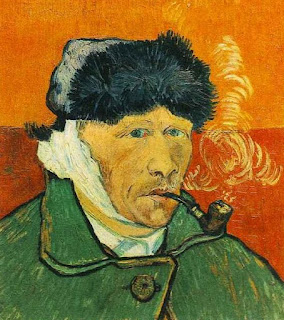 "Mom, can I update the calendar rules book now?" Conor calls out in his sing-song while he bounces the big purple ball behind the pet gate set up to keep the dog contained in the kitchen. Slam, slam, slam, slam. The ball slams against the wooden floor. Against the wall. Against the pictures hanging there.

"Sure, Conor, go get it out of your backpack and bring it here." I start shoveling the remainder of sausage and peppers into my mouth as quickly as possible. (Thank God my husband made dinner.)

He sits at the kitchen table next to me, the purple bouncy-ball bought at Target in a moment of weakness resting quietly (at last) in the hall.

"Here is the calendar rule book, Mom! I want to update Friday, July 20th to Clayworks instead of Michaels!" He says emphatically, and points to July 20th on the calendar.

Me: Sigh. "Conor, it's not that simple. I can't just schedule in some random time to go make your own pottery, honey. I have to figure it out first. I've emailed the lady. She hasn't gotten back to me."

Sure, they have an 8 week class--Basic Wheel: The Learning Curve!--but that's not really going to work for us. We need 1:1 instruction, small classes, no little kids running around, staff that knows what to expect (although I will certainly take a therapist with us).

Dad (scrubbing pots and pans at the sink. He cooks AND cleans.): "No, Conor, it's more difficult than paint-your-own-pottery. To make the pottery, you have to schedule time to work with the clay, then the pottery wheel, then the kiln. It's complicated."

Conor turns the page in the calendar rule book. "Here! You can go make pottery at Clayworks on August 24th!" He points and looks up expectantly.

Me, exasperated. (He's been asking for weeks): "Conor, I can't tell you what day it's going to happen right now. I left a message for the lady. We can talk to Mrs. Howcher about it tomorrow during art therapy. Ok?"

Conor: "When can Conor go to Clayworks and make pottery? What day?"

Me, deep breath, trying to keep my cool: "I don't know, honey. The lady has to get back to me."

Me, resigned: "I don't know, sweetie. Maybe tomorrow." I give up. It's such a simple but, at the same time, deceptively complicated concept. Yes, you can do this but no, we can't tell you when. At least, not just yet. Stupid communication disorder.

Me, sighing again: "No, honey, we won't go make pottery on Friday. We'll have to figure it out."

I swear, Van Gogh probably cut off his ear because his mom wouldn't schedule time at the local art studio.

Artists. What're you gonna do? Schedule the damn thing, already, I suppose.
Posted by Alisa Rock at 9:49 PM