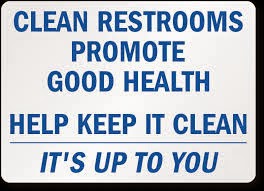 Guys, I found a schmear tonight. Of poop. On the closet door in our first floor bathroom.

Well, it's not really a closet, it's some doors we put on a shower stall that cost too much to take out of our miniature bathroom and truly convert to a closet, so it's a set of closet doors to a shower that I store stuff in for the bathroom like toilet paper, wipes, towels, and tampons and stuff.

Oh right, that's not the point.

What is the point, exactly?

Oh, the schmear. Right. Listen, I know I have no place to complain about the poop thing. My son is pretty independent in the toileting area, and I know plenty, I mean, PLENTY of people whose children are not, and they have Code Browns all the time. I'm not changing diapers on my 15 year old, so no complaints.

My kid is pretty verbal, he reads, he writes, he does some math. He cooks, he creates, he swims. I've got it, well, not great but ok compared to lots of families in my situation. I mean, there's the grand-mal tantrum thing, that sucks (particularly the three hospitalizations, one for 5 1/2 months), and the inappropriate behavior, the perseverations, and the upsets and the protocols out the whazoo and everything else that comes with his autism, but still...

So I'm just going to spend ten minutes meditating on how grateful I am for all those good things.


Ok, fuck it, fine, whatever, I'm complaining. I have a 15 year-old son with autism and lots of skills and still...still, with the schmears of poop. (Which Google keeps trying to change to schemers of poop, and I am not amused, Sergey. At all.)

I'm sorry, I know it's just a small thing, teeny-tiny, almost nothing, a little schmear, but it's just gross. And it catches me off guard. I think that's what it is, to be honest. I go along, thinking that this part of his life is fairly typical, you know, one less thing, and then--wham--autism, right in my face. In a very icky sort of way. I've spent the last ten minutes changing all the hand towels in the house because, well, you never know. Don't want to be scrubbing the day off of my face and--surprise! Here's a little schmear for ya, Mom!

Yeah, well, by now it's evident that my so-called meditating isn't helping me with the complaining and a positive outlook. So I think I'm gonna go on YouTube and watch videos of kittens and puppies cavorting with cheetahs and elephants to a Turn Down For What? soundtrack to put me in a better frame of mind.