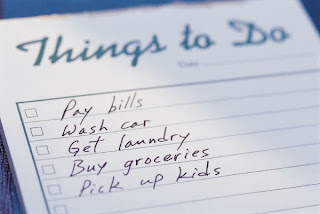 You know, I try really hard to be prepared.  To keep everything together so that our days go smoothly.
I make lists and post them on the refrigerator.  I’ve put together a nightly routine to make sure the morning routine is seamless.
I’m like an Olympic figure skater, I’ve got so many routines. Plug in the iTouch, make the lunch, check the backpack, find the sneakers, fill out the communication book, skip the homework, set out the uniform, check the laundry, drink the wine.
I’ve got calendars and reminders, iPhone apps and alarms beeping at me throughout the day.  My sisters know to send email reminders.  I call people to follow up and leave voice mails when I can.  I’m like a really persistent (but nice) telemarketer.
Sometimes, though, no matter how hard I try, life keeps throwing curveballs at my head and I can’t get out of the way fast enough.
This morning goes seamlessly at first.  Get the little kid dressed, breakfasted, and on the bus. (Little kid bus stop is ½ mile away and yes, I drive there.)
Race home to help the hubby get Conor finished. And behold, we are ready to get on the bus fifteen minutes before its intended arrival.  I sit on the porch to surf my iPhone and wait for the bus.  Conor’s inside, playing the Wii while he waits.  Great.  Routine, love it.
Five minutes later, my husband comes outside.  Bus company called.  Bus driver has been in a minor fender bender and the bus will be late.  Ok, I say calmly.  How late?  Don’t know, he replies.  They’re waiting for the police.
Ok, it’s Baltimore and we know the po-po doesn’t show up quickly unless there’s a gun involved.  We brainstorm with the school and decide to tell Conor the bus is “broken” and we have to drive him to school.
Caterwauling and gnashing of teeth ensue, mostly by Conor.  I ramrod him into the backseat of the car and take off, all the while Conor crying, “WANT CONOR TO DRIVE THE ACURA!  WANT CONOR TO DRIVE THE ACURA!”
I’m terrified this means he will jump into the front seat with me and slam the car into park or something, but he holds it together.  Barely.  The longest three miles of my life.
I struggle with this issue almost daily with my son.  No matter how much I prepare and organize, no matter how many lists I make or phone calls I place, no one can control everything.  He’s got to learn how to roll with things. He just does. Life is unpredictable.
But my kid, he’s no roller.  He’s more like a cube.  Sometimes you’re able to push him into rolling over, but it ain’t pretty and you can tell it’s uncomfortable.  And I’m not sure how you turn a cube into a ball, but we’re just going to have to keep trying.
Posted by Alisa Rock at 8:24 PM