I mean, the PROOF that your child was typical, that you aren't a CRAZY mom who just didn't WANT to see the signs.

Ok, maybe a video would have been helpful. Just sayin'.
I sit and stare sometimes, though, at the still pictures I have of my son prior to his regression. And, I must admit, those taken during the regression.  I search and search for clues that I might have missed. 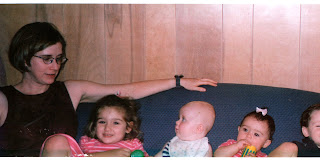 Like this picture above…  that’s me on the left before I had Lasik surgery. (Boy, did I need some highlights. I must have been still breastfeeding.  Or unusually frugal.)

The bald one, that’s Conor.  He’s probably about 7 months old here?  8 months old?  He’s the only kid referencing a parent in the photo.  The rest are still typical… his cousins. (It's one of those panaromic photos that my scanner couldn't fit all together.  Meh.)
Or this one, I think he's a year old?  We're reading together.  Joint attention, anyone? Or maybe I'm just fooling myself... maybe I just want it to be true.  But you can't always get what you want... 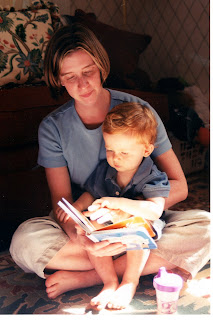 Once he regressed, his referencing and joint attention disappeared. Poof.  Gone. Like bad Bellatrix Lestrange/Death Eater magic. But that haircut stuck around.  I still have it!
To me, Conor’s regression took seven days.  We were on vacation on a tropical island with two of our closest friends. My friend Tim teased me about how often I was saying, “Conor, use your words.”  Because instead of using the 100+ words he had (and the two and three word sentences), Conor just…. well, screamed.
It’s not funny, I told Tim.  He’s not using any of his words. I was frustrated.  I didn’t know that I should have been terrified.  (That came later.)
Here’s a picture of Conor during his regression. 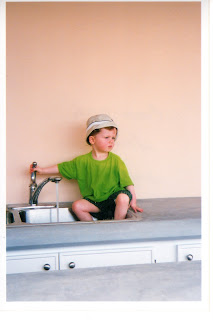 He’s looking away, no more referencing.  What you don’t see in the picture is the beautiful pool in front of this outdoor sink.  A pool Conor wouldn’t go in.  Every time we tried, he just screamed.

He wouldn’t put his feet on the beautiful white sand at the beach.  It was as if it hurt him to touch it.  My husband and I were perplexed.
Instead of swimming in the beautiful water and enjoying the tropical beach, Conor threw rocks one after another into the water (on the rocky beach, not the sandy one), sat in the sink, and demanded to sit in the minivan we rented. 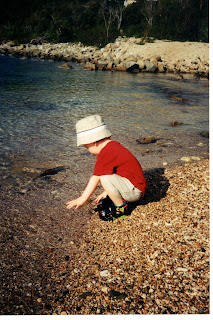 We had a beautiful house, with a playmate (albeit a younger one), a pool, a beach, and toys galore. And Conor wanted to sit in a sweltering minivan. 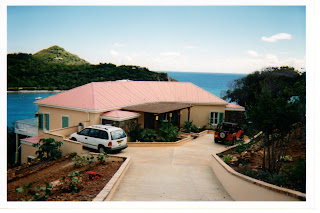 Oh, did I mention it was a bjillion degrees in the minivan?  St. John is a tropical island, after all.
My husband and I didn’t know what to make of it.  We were exhausted because Conor had stopped sleeping through the night too.
By the time we arrived home, we were tired and scared. What do you do when your child stops looking at you, except when you sing "Take Me Out to the Ball Game?" You know what to do when your child has a fever, when they break an arm or swallow a quarter.  But what do you do when they stop talking, stop sleeping, stop being there?
Well, you do a lot.  But that's for another post.
Posted by Alisa Rock at 9:55 PM