Fight for Your Right to Party 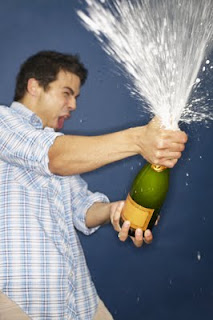 Now that Conor’s been on the NBU for a couple of months, I’ve started to take advantage of the fact that he’s in the pokey until at least the end of October.  We’ve gone on vacation, albeit separately, and I’ve taken some time to travel with my typical kid to Busch Gardens.  (Courtesy of my Mom and Dad, gotta love that. Free vacation, whoopee!)
I’ve reorganized some closets and have five boxes of unwanted items to donate to Goodwill.  (I know, I know, I’m a dork.)
I’ve gotten a babysitter for Aidan and dragged my husband to a romantic comedy.  (Midnight in Paris, highly recommended and Owen Wilson’s hair didn’t even bother me.)
I’ve called the painter and I’m going to get Conor’s room fixed up since it’s a disaster and hasn’t been touched in the last ten years.
But now…
I’m starting to have a hankering to host a real throw-down.
In the interest of full disclosure, I should admit that I’ve been known to enjoy a party.  Or two. Or three.  Well, you get the picture. My last name's not Rock for nothin'.
Jimmy and I haven’t had a party at our house in years.  Hell, we practically haven’t had our family over for a visit on a Sunday afternoon.  It’s just been way too hard to try to do anything of the sort.
But now that Conor’s on the unit and only comes home for visits once a week…  I think I may try to convince my husband to throw a really BIG BASH.  You know the kind… you invite all the neighbors so that they don’t call the cops on the noise and whatnot.
Friends you haven’t seen in years come to visit and bunk on the third floor in sleeping bags.  (They’ll be so drunk, they won’t even notice that the air conditioning doesn’t work so well up there.)
We’ll serve Andy Nelsons’ Bar-B-Q (“hogs smell better roasted” and they taste better too yum yum) and catch up with all the people we haven’t seen in years.
Copious amounts of wine will be drunk, beer will be guzzled, and we’ll laugh at the couple that we had to drag out of the bathroom.  (Get a room, will ya? We’re over forty, for Christ’s sake!)
We’ll stay up past (gasp) twelve o’clock!
The house will be a disaster, I will have spilled red wine all over my shirt, and it will take us a whole week to recover but, hell, who cares?  We’ll have had such a fab-u-lous time.
Sounds nice, doesn’t it?  I think the guilt might kill me, but it could be worth it.
Party on Wayne.  Party on Garth.
Posted by Alisa Rock at 8:54 PM