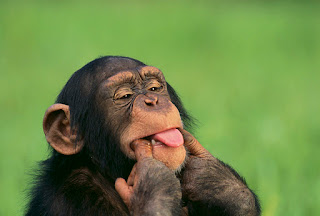 I now have proof that humans have descended from apes.  It’s Conor.  He’s unleashed his inner chimpanzee, and I have to say, it’s really, totally, horribly annoying.

Conor’s never been a quiet kid.  He’s always engaged in a lot of nonsensical noises, generally in a loud voice.  But this… this new noise takes it to a whole other level.

Normally, I don’t care if he makes noises.  It helps me keep track of what he’s doing.  (Too quiet is actually a bad sign.  Quiet means he’s up to no good.)

We actually used to encourage him to go into the depths of our unfinished, dirty basement to whoop it up.  He’d ride around the dirt floor on his scooter, sing bastardized versions of The Lion King songs at the top of his lungs in a nice falsetto, and eat the scraps we’d throw down to him every night.  (That’s a joke, by the way. The scraps part.)

But this new chimpanzee noise, it’s driving me crazy! He’s literally doing it at the top of his lungs.

And in the shower too, for good measure.  He gets phenomenal reverb in there and jumps up and down for good measure.  I keep expecting him to throw feces at the glass like the chimps at the zoo.  (I kid, I kid you. It’s a joke, the feces part.)

(Yes, Mom, I know jumping in the shower is bad; he could fall.  We’re working on it.)

The worst--when he adds his new favorite activity to the chimp screams.  Bouncing the ball.  In the hall, not the shower.

Any ball, he’ll bounce.  Watching him try to bounce the golf balls off the walls led me to ban them in the house. We have windows and mirrors and pictures and things with glass, after all.

He’s particularly fond of those medium-sized plastic bouncy balls from Target (they make a nice “ping!”), but he also likes tennis balls and Sky balls.  Sounds innocuous enough, the ball bouncing.  Until he’s on his twentieth minute of bouncing on the wood floor, that is. 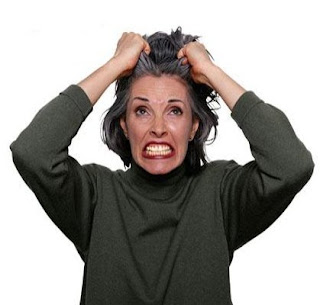 That last one, that was me pulling out my hair.