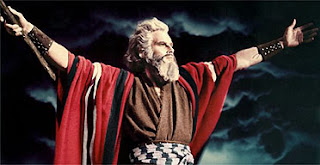 A couple of weekends ago, Conor requested paper and pen and sat down at the kitchen table to write.

He made four columns.  At the top, he wrote down the names of his in-home aids on Saturdays, Sundays, Tuesdays and Thursdays.  He then proceeded to make four lists.

“What is he doing?” I asked my husband. He was sitting at the table, watching Conor with fascination.

“I think he’s writing down his schedule of activities, but in some sort of acronym form,” he replied with a sideways smile.

(When the aids come to hang with Conor, he writes a schedule of activities.  It keeps him structured and engaged, and he knows what to expect. Plus, it gives him some control over things while having him practice the fine motor skills involved in writing. Win, win, win, win and win.)

Oh, how cute, we thought. 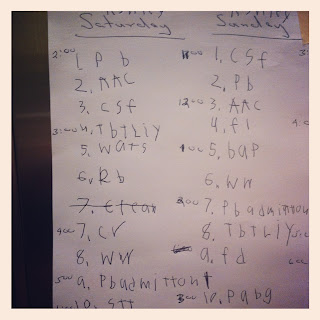 Pb=Play Basketball.  AAC=Arts and Crafts. CSF=Cook Something Fun. TBTLIY=Throw Balls To Linus In The Yard.
“Wow,” I said.  Just, wow.

Man, there’s so much in that brain, despite its faulty wiring.

And then, he requested tape so he could post it on our refrigerator among the many dot-to-dots that he’s completed. 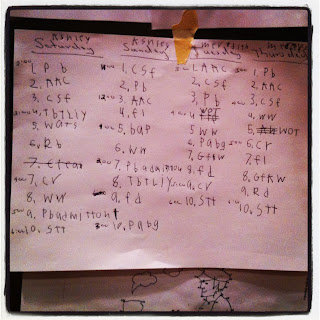 Little did I know that I had just posted the Ten Commandments of Conor’s schedule with his aids.

Do you think Moses’ mother was surprised when she saw the Ten Commandments?  Did she understand what they were? Did she know that you don’t mess with the Commandments? EVER? (I mean, they’re etched in stone, that’s gotta be a big clue.) 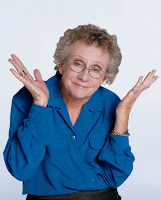 “Moses, why did you do that in stone, don’t you think you might want to, I don’t know, change it up once in awhile?  I mean, really, is it that horrible to covet another man’s wife?  It’s not like you’re really doing anything.  Just thinking, after all.  You don’t even say it out loud.  And, you might want to add another commandment later.  You never know.”

I’m not sure if Moses’ mother felt his wrath when she tried to mess with his missive.  Me?  I had no clue what I had just witnessed. But Conor certainly showed his displeasure when I tried to insert Walk On Treadmill into the schedule on Tuesday. (Tuesdays with Meredith.)

WOT=Walk On Treadmill. Just pencil it in, Conor, really.  Between Pb and WW, honestly.

(WW=Windex Windows.  He’s on a Windex kick.  I think he gets a buzz off of the smell. Hey, whatever gets you through, baby.  Whatever works.)

Lordy, you would have thought that I tried to take out “Remember the Sabbath day”.  The stomping and the screaming and the crying and carrying on. He never did have a full-blown tantrum, but man, we came close.

And then, at the end of an hour of upset, my husband finally got Conor onto the treadmill for five minutes.  Conor then leapt off the treadmill, ran downstairs, went to his commandments and crossed off FTF (Feed The Fish) and penned in WOT. 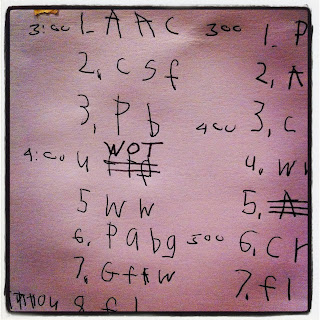 Whew.  Better get that engraved in there ‘cause I’m supposed to be getting him on the treadmill every day.  (Doctor’s orders.)

Too bad, little fishies, you're not getting fed any time soon. At least, not by Conor during his time with his aids. You've been replaced by WOT. It has been decreed.

It all makes me wonder, though. Did Moses put in Honour Thy Mother and Father just to shut his mom up, you think?

So, so funny...not to mention amazing! And I have to admit to being more than a little bowled over by the list. I want one.
Looks like Autism really isn't a modern phenomenon...xxx

25 minutes on the treadmill today. Guess it's now the LAW.