What Are My Options Again? 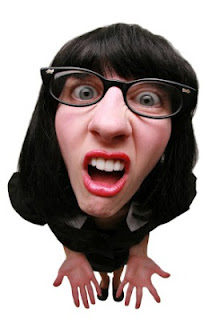 Lately, I’ve started talking to Conor about his options. (You know, options to having a temper tantrum.)  Choices.

It all started because we would ask Conor to pick from “options” of activities.  Left to his own devices, he’d inevitably pick an obsessive interest that could lead to problems.  So if you ask him what activity he wants to do, today he might point to himself and reply, “What are Conor’s options?”

We’re fortunate that he has the receptive language and the cognitive development to comprehend this.  We are not so fortunate in that it doesn’t really seem to help when he can’t get what he wants.  In the heat of the moment, ingrained behavior, anger, and frustration seem to overwhelm his rational mind. (I always picture it like a red tsunami in his brain, blotting out reasonableness and his affectionate nature.)

But, the process makes me feel better--more proactive--and maybe, just maybe, one day it will stick.

Recently, Conor’s given my husband quite a few fits when he doesn’t have enough money to buy what he wants on his earned community outings.

My boy’s a shopaholic, so the NBU put him on a budget.  It’s been so helpful.  He asks to buy something. We reply that, certainly, he can.  If he has the money in his wallet.

Except now he’s started to ask me—“Mom, what’s YOUR budget?”

So I started anticipating problems before outings.  And I would try to think of solutions.  (See Conor?  You don’t have to get upset.  Mommy’s got it all figured out FOR you.)

Last week, Conor requested to go to the local mall.  Turns out he wanted to buy himself some new threads.  Hey, a guys gotta look good, right?

Conor wanted to go to Gap Kids and buy a new collared shirt.  Because the 10 polo shirts mouldering in the bureau just weren’t fly enough, I suppose.

Conor loves to wear “collared” shirts to school.  (He thinks he has to, since his brother is required to wear one to his school.)  He pairs them with his sweatpants or athletic shorts, which can wind up looking quite comical.  What can I say?  He’s fashion geek, not fashion chic. (And he can’t handle buttons and zippers very well.)

So I sat down with him to review his options if things didn't work out the way he planned in his mind. Sometimes half the battle is just figuring out what he expects.  It's not like he tells you ahead of time.

It didn't matter that I was taking muscle with me. (I try not to go on outings without my husband or a therapist.)  I want Conor to learn that his behavior is a choice, just like choosing what shirt to wear or what birdhouse to paint.

And so, I sat with him and wrote out our options. 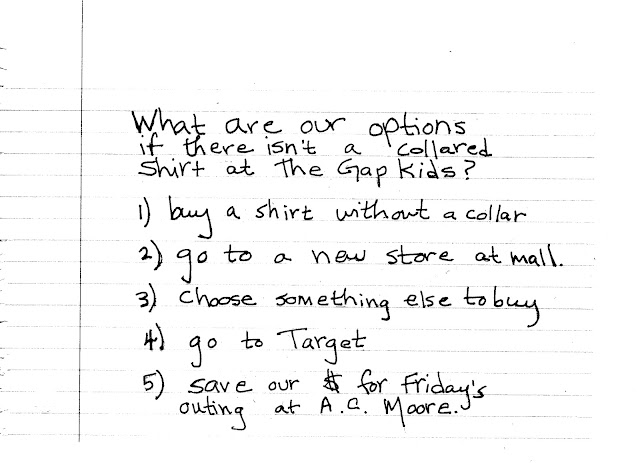 I wish this would really work.

I wish I could sit down with my son, like I sit down with his brother, and talk about his behavior, and his feelings, and think about what it all means.  It would be so nice to outline for him all the wonderful things he could be doing if he could just behave himself.  And by behave, I mean not have a tantrum.  I’m not expecting perfection. I don’t ask for typical.

I’d like to sit on the bed next to him before he falls asleep and tell him what he did that day that was really great and what he did that could he work on, and have it mean something. Have an impact. A real heart-to-heart. A tête-à-tête. A meeting of the minds, as it were.

I wish we could put our heads together, make a plan, and roll with the punches if it doesn't work out.  Maybe one day.  Maybe.  A girl can dream, can't she?