The Birds and The Bees, A Chicken and An Egg 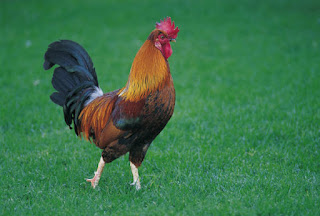 "I think we're in trouble, Alisa," Paisley said as I walked into the kitchen yesterday. She and Conor had just finished mixing up a cake for his Cook-Something-Fun! activity on his schedule.

"Why?" I asked, a little puzzled.  Everything looked ok.

"Conor's been asking why there wasn't a chicken in the egg," she replied, smiling. "I explained to him about the yolk and the shell blah blah blah, but I didn't want to get too far into it."

Oh dear infant 8lb 6oz baby infant Jesus who don't know a word, please save me. I am not ready to have The Sex Talk with Conor. I wouldn't even know where to begin. I am aware that he knows women can have babies in the bellies, he tells me all the time.

But that's about it. I think.


He does know that chickens lay eggs since his former tutor raises chickens in her backyard now and he likes to pick out some eggs and put a hen on his shoulder.

Easily, I envision how The Sex Talk will go with my typical kid; he's 10 now and I'm just waiting for the right time. But Conor? What do I say? How do I say it? Does he even know women don't have penises? Where do I start?

Relationships in general are practically impossible for him with his lack of social skills.  How can I possibly explain the most complicated sort of relationship? I mean, I feel like I'd have to explain more than just the simple mechanics.  Or maybe not.  Maybe that's enough. Whatever, I don't know.

I mean, I can't even think how I would write that social story.

Well, Conor, when a rooster and a hen love each other...

Luckily for me, I did some searching on the Internet (gotta love the Net) and I found this social story here.

I know, totally. I had to explain sex to my typical kid today. He looked like he was going to vomit.