Late Friday night, our power went out after a shitstorm of a maelstrom of a thunderstorm. It is now Sunday, and our power is still out. (Estimates have the power back on next Friday.  Or the following week.  Maybe next month?  Who knows.)

So, let's get a good picture of how Conor reacts when the power goes out in our house, shall we? 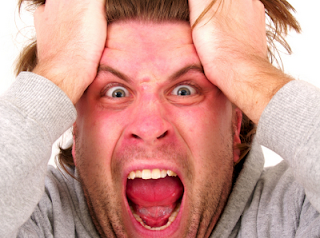 Plus, no lie, it is a bjillion degrees this weekend.  And this barely-Southern gal ain't hanging around with a wackadoodle kid in nature's version of an Easy-Bake oven, get what I'm sayin?

So my husband, our two sons, and our amped-up, vomiting standard poodle did what children all over the world do when the going gets tough.

We fled to my mommy's house, 40 miles west of the city.  The first morning, we had a 5am wake up call from Conor. My back hurt from sleeping on the couch. My eyes burned since I'm allergic to Mom's dog (a golden retriever/lab mix that sheds like she's got stock in fur balls) and the dust mites from said couch. I'm not even going to tell you about what my nose has got going on.

But, it was nice and cool in the basement!

My neighbor called me today and swore up and down that our power would be restored. She spent 20 minutes on the phone with the utility company. We're on the same line as a fire station, she said; they HAVE to get the fire station restored quickly, right?

We hightail it back to the home front.  Bad move.

Apparently, the fire station did not have the pull my neighbor thought it had. A few hours of trying to manage Conor's behavior, and we headed back to my parents' place.  Where we promptly had to reel Conor back in from the ledge yet again.

Oh, and he's supposed to go to school tomorrow.  Except he's not.  Because the school's out of power.

So let's see.  To recap.  Our house has no power.  All the food in the house has spoiled.  My dog is throwing up.  We're living in my parents basement. Conor has no school.  We have no respite care here in the 'burbs. My typical kid tells me he's bored every other second. It's a 102 degrees in the shade. We have a tsunami of trees and tree branches in our front and back yards. And my kid has autism.

Oh, and did I mention that I expect five of my in-laws to come visit us 10 days from today?

I'm going to curl up in a fetal position in the corner of the basement under a blanket (it's really cool down there) and don't disturb me when I start making the mewling sounds.

You pushed me right over the edge when you said your in-laws were coming over to visit. Good God All Mighty, you poor thing. I'd offer to send virtual hugs but I think if I sent you bendryl or claratin or alcohol you may be better served.

They're wonderful people, and I'm looking forward to seeing them. But how in the hell am I going to clean the house and be prepared? LOL.