My father raised me as a Baltimore Oriole fan and thus, I have remained one.  If you’ve ever been to an O’s game, you know that in the 7th inning stretch, John Denver’s “Thank God I’m A Country Boy” blares.  Everyone stands up, and like a bunch of awkward, drunk puppets, we all slap one knee while lifting that same leg up and down to the beat of Denver’s song.

I don’t know why the team adopted this little ditty as the 7th inning stretch rally song.  If Alabama is the Deep South, Maryland’s the first step into the shallow end of the southern pool. We’re Southern Lite, I suppose. People commute daily from Pennsylvania to Baltimore, for Pete’s sake. Cal Ripken Jr. used to hit homers that practically made it to the northern border.

But, this is our tradition and I join in with everyone else in the stadium.  What the hell, it’s fun, especially after two or six microbrews and a couple of Boog Powell’s pit beef sandwiches. Laced, of course, with a very hot, nose clearing, wet horseradish sauce. (Boog Powell ranks third in Oriole all-time home run hitters, with his best year in 1964. Now he owns a pit beef place at the Yard. Just FYI.)
Ok, ok, it is ENTIRELY possible that I’m the only person doing this drunk puppet dance. By the 7th inning, it’s not entirely clear. I guess you’ll have to go to a game to see for yourself.

In any case, when Conor started stomping his foot and slapping his knee and screaming at the top of his lungs during our outing to Panera Bread yesterday, I insanely thought to myself, “Thank God I’m A Country Boy.”  He was, I gather, extremely upset that they didn’t have his first choice of bagel (an “everything” bagel) or his second (sesame) or his third (poppy).

Yesterday was Mother’s Day (as if you didn't know), and I suppose every mother in Bawlmer needed her everythink bagel, hon. I don’t know, but there wasn’t a bagel in the joint. Not one Conor could stomach, anyhow. (Who turns down a cinnamon crunch bagel, I ask you?  Who?  That’s just plain craziness.)

After a couple of these stomping, knee-slapping, caterwhauling “dances”, Conor’s behavioral therapist, Paisley, and I fled the scene like armed robbers who just realized an FBI agent was ahead of them in the bank line.  Fled, I tell you.  Like the law was right on our tails.  (Book me, Danno, I need a vacation.)

"CONOR WANTS TO GO TO CHIK-FIL-A FOR LUNCH!" (Closed on Sunday, dammit.)

"CONOR WANTS TO GO TO AUNTIE ANNIE'S FOR LUNCH!" (Ok, want to go there? Please say no, please say no. The mall has lots of people.)

“CONOR WANTS MASHED POTATOES FOR LUNCH!" (you want to go home for lunch, C? You can have rice cups!)

Finally, we drive to a nearby small, locally-owned bagel shop.  They had gobs of “everything” bagels.  We know this because I sit in the car with Conor while Paisley does some reconnaissance.  Hey, I’m not getting out of this car if there’s no everything bagel, you feeling me?

They have the bagels.  They have lemonade.  He tearfully orders. We sit and eat.  We feel better.  We ask for ice cream. 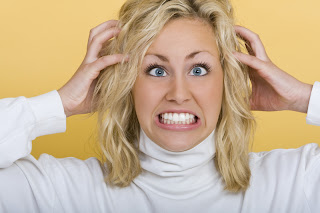 Paisley and I get on our phones to see if the ice cream place is open.  Hey, I’m not doing this “we don’t have what your kid wants” thing twice—IN PUBLIC. No. Way.

They’re open. We drive over. Conor orders--"vanilla ice cream with rainbow sprinkles, please."  Paisley gets pistachio.  I dream of a glass of wine.  We sit.  We eat.  We talk. Hey, nothing wrong here,  nothing to see, let's all just be calm and breathe.  Deeply.

As I handed Paisley her money yesterday afternoon, I looked her in the eye and told her, “You know, you earned every penny of this today.”

Yeah.  Thank God it was only Thank God I’m A Country Boy.