The Answer? There Are No Answers

Last week (was it last week? It's been so long since I've written that I've lost track), I posted this handwritten note from Conor, and I asked readers what they thought it meant. 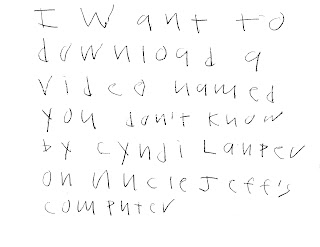 The silence on my blog was deafening. (I had a few posts on my Facebook page, but my sisters don't count. They have to participate or I will give them titty twisters at Thanksgiving.)

Because I have an incredibly big ego, I'm going to assume that very few people even wanted to venture a guess since they had absolutely no clue. (This is preferable to my other more realistic assumption, which is that no one reads my blog and I'm whistling in the wind here.)

So, the first person to guess correctly via Facebook was my friend Penelope. Penelope has an incredibly handsome adult son on the spectrum who attends college and lives independently now. (Let's give it up for Penelope and her son! Whoop whoop!)


I have no clue what the function of this note is,
but if Conor wrote it, I applaud the use of the first-person pronoun.

It's a good thing you moved to a different state or I would box you about the ears. Then I would buy you a vodka tonic and beg you to forgive me and still be my friend. Love you!

I offered the $10 gift card to Penelope, but she said that her new town did not have a Starbucks, Dunkin' Donuts, or a McDonalds!

Who lives somewhere without a Starbucks? Is that even possible? The horror, the horror!

Finally, I received one comment on the blog from Shawnbeth, who also correctly answered the question, saying--


I have no guesses, but I do enjoy your blog a lot!

Shawnbeth, you are a genius.  Not only are you a connoisseur of supremely fine bloggish-type writing, you hit the nail on the head.  Email me your mailing address and I'll send you a gift card to someplace where you can hopefully get a hot cup of coffee.  (Unless you live on the moon with Penelope, in which case I'll send you a MRE.)

Look, I have no clue what this note means. Not really.  True, he used to be obsessed with downloading songs and videos on every computer he could put his eyes on, including his Uncle Jeff's. But it's been over a year since he's been allowed to do that, and this request has morphed into some sort of early warning sign of agitation. Sometimes he'll even say an unreasonable or nonsensical request in order to elicit a verbal "No" and then he'll tantrum.

The best we can figure is that he's trying to assuage some negative feeling (anxiety? disappointment? compulsion?) by doing some sort of obsessive behavior. We think. Sometimes. Maybe. Perhaps.

But he's agitated, and about what, exactly?  I don't know. No guesses. No ideas.  No clue. He can't say, and I don't know.  The best we can figure, this is his way of saying "I'm upset and I need help calming down or I might blow."

School:  Conor got upset about something today
but we don't really know what it was.
He did try to erase something off the board but we don't know why.

Well, you got that right, Conor.  I don't know.  It's so hard, the not knowing. Hard on him and hard on us.

I read your blog often. I just laugh because I feel like you and I were separated at birth and our children are so much alike in many ways. Many times, I am the detective and get lost in translation as well. Interesting how THEY don't even know what is bothering them... So how are we supposed to ?

I know, I agree. At the same time, I feel that I know Conor so thoroughly, so through and through, that I know exactly what's going on and then I feel I don't know him at all and can't figure him out to save my life. It's quite confounding.

If the kid connects with the song/video and is communicating, let him listen/watch for god's sake! Have you noticed the child w/ autistic characteristics at the end of the video? Maybe he's trying to tell you and possibly his uncle something! I would guess he's a visual learner and trying to communicate to you/his uncle that he needs to find a way to belong/doesn't know why he doesn't belong. He probably identifies with the "you" in the song. He probably IS distressed and wants to connect more freely.

My son has been given multiple opportunities to download the video on his own computer here at home. He declines. He does not want to tell his uncle something specific, unless he also wants to tell Jeff about being "Like A Virgin" which is another video he wanted to download on Uncle Jeff's computer.

That's kind of my point. It's not about the video. He has an iPad and iTouch he could put the video on and watch multiple times per day. He declines. Yes, he's obsessed with Jeff's computer, but he also would grab a stranger's iPhone and download songs and applications on that. He's also obsessed with Gabby Rutz at school and about painting bird feeders.

Yes, the note indicates some distress. He IS trying to communicate something. Clearly, he's upset about something. This we have learned. But I don't know what that is, he can't say, and it's not about the *specific* video.

Maybe he's trying to tell me something when he downloaded Beyonce's Diva video. Hmmmm.