Problem, First World It Is 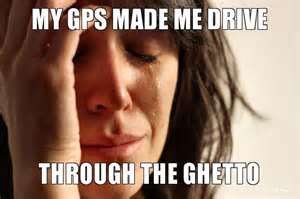 Over the past few months, Conor has developed an obsession with the navigation system on our cars.  I have no clue how this particular obsession started. I really don't. But when we purchased a new SUV last March, Conor decided that he absolutely had to map every destination to which he journeyed. (We had a nav system in our last car, but he didn't really care about it. Then, bam! New car=new obsession. Go figure.)

It doesn't matter whether it's down the street or to his grandparent's house, to the library or to the beach, it is absolutely required to first look up the address on a smart phone and then input it into the GPS. Red Robin, Outback Steakhouse, the bowling alley, his aunt's house or the mall...no matter that he's been there a bjillion times and can give you the directions himself, ve must put ze address in ze system or else!
I'm not kidding, the library is a 15 minute walk from our house, and he still insists on putting the address in the system. (Hey, of course I drive, it's wicked cold out there. I'm a delicate flower, you know.)

School.  He routes the drive to school. 3 miles from our house. He still routes it. It's maddening.

(And yes, he sits in the front seat of the car. Hell, he's bigger than I am and I sit in the front seat. Seriously, though, I don't always like him sitting in the back seat with his younger--physically much smaller--brother.

And, of course, he knows how to program the thing. He's better at it than we are.)

Now, I don't know what it's like where you live, but I live in Baltimore. 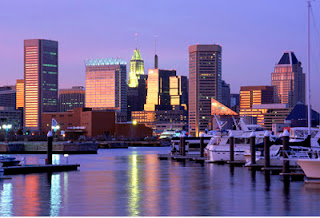 Yes, Baltimore. And I don't mean the suburbs of Baltimore.  I pay city taxes, hon. I reside (gasp) within the city limits.

Baltimore--home of The Wire, Homicide: Life On The Streets, and Hard Times At Douglass High.  You can argue about the accuracy of the portrayal of my beloved city, but its reputation is such that The Onion recently satirized Charm City's parade for our Super Bowl XVLII Champion Ravens.

(See The Onion's Baltimore Looking For Safer City To Host Super Bowl Parade. It would be funny if it weren't so sad.)

I don't care what you say.  I love this city somethin' awful.  I'm not really sure what it is, exactly, that captivates me. Amazing restaurants? National Aquarium? Revered colleges and universities? Award-winning hospital?

Maybe it's because I spy John Waters at the grocery store now and again... and the cashier has no idea who he is!


Maybe it's because you can buy crab cakes and a microbrew at the baseball stadium or the pockets of beautifully renovated row houses throughout the city. Perhaps it's because I can walk to the grocery store, the library, a Starbucks, the chinese carryout and still only be five miles from downtown.

Maybe it's because there are people here a whole helluva lot weirder than my kid with autism. (Like John Waters, for example.)

My lust for Monument City aside, in truth we have a serious crime problem and some significant urban decay. As a resident, I've gotten good at avoiding dodgy neighborhoods and crime-infested areas when I'm not scoring some smack. (I kid, I kid you. It's a big problem. The city's, not mine.)

See, the thing is, Conor takes the GPS route as gospel.  If the thick blue line points one way to the bowling alley, then by God you are to follow that route like a Catholic pilgrim to Medugorje. One does not deviate from the path set by the almighty car navigation system.


Grave danger you are in. Impatient you are. The GPS you must follow. 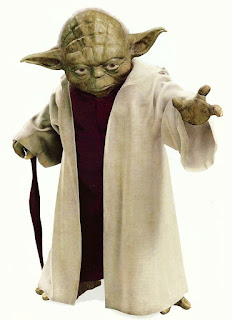 Taking a turn not sanctioned by the GPS system? Have you gone to the dark side? (You can almost see the fireworks going off in Conor's brain. It blows. his. mind.)

So last night, as we were heading to our local Red Robin restaurant for dinner, I lost my bearings because I was in the back seat, engrossed in figuring out how to get Face Time to work on my typical son's iPhone. (Hint: don't let the little whippersnappers change the date and time on their phone. It mucks everything up.  Who knew?)

I look up at the buildings flashing by in the dark, and ask my husband, "Where ARE we?"

"Following the GPS, hon," he replied in his best fake-Baltimore accent.  (He's a carpetbagger from Connecticut. I know, right? He's cute though.)

Oh, for the love of Pete. "Which would you rather do," I asked my husband. "Drive through the ghetto following the GPS or tell Conor we have to go a different way than the route on the screen because it's safer?"

"Drive through the ghetto," he promptly answered.

"Ah," I declared. "Remember, Jim. If once you start down the dark path, forever will it dominate your destiny, consume you it will, as it did Obi-Wan's apprentice."


Be careful, my love. 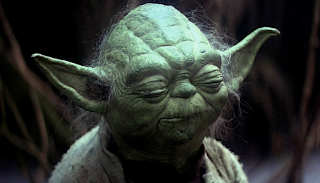