Poop. On the floor. 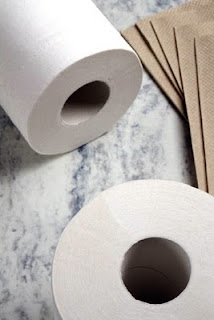 Today, I found poop on the floor of our master bathroom.

I thought it was some leaves.  Hey, I’m middle-aged now and my eyes aren’t what they used to be.  And it was early.  So I touched it.
It wasn’t a leaf.
It happens.  Shit, that is.  And no, it wasn’t the dog. Linus has never had an accident in the house.
My kid, on the other hand, does. In his defense, he was probably wiping.  It wasn’t a big poop on the floor, and he stands up and turns around to wipe.
Wiping your bum is remarkably complicated, apparently.  Because we’ve been working on this forever.
This is the part where I shrug my shoulders and figure, whatever, he’ll get the hang of it.  Eventually.  I hope.
Then we can work on washing our hands religiously.  Cause I found a schmear on the wall, too.
Posted by Alisa Rock at 1:29 PM

I feel your pain! Truly.

My boys are both still in diapers and when I can get the older one on the potty it is because I stalked him through the house waiting until he looked like he was needing to go.

Can still happen to us - schmear on the wall, that is. If Ryan gets it on his hands, it doesn't occur to him to wash it off. His immediate reaction is to smear it off onto something else, THEN wash his hands.

At least he no longer eats his poop.

Sunday, it's such a challenge, isn't it? There was a time when I was the only one (at least it felt that way) who could tell Conor even had to go. He HATES going (although he's much better now) and would stand there with his legs crossed.