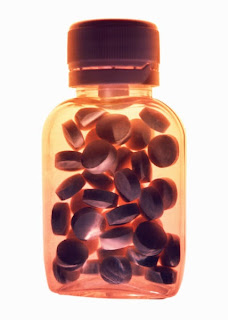 Today we just discovered that the psychiatrist in charge of the unit took Conor off of his Depakote about 10 days ago, I guess.

Boy, does this explain a lot.  Why the crazy came back this past week.
(For those that may not know, Depakote is an anti-convulsant that is used to help control mood instability and aggression in children with autism. Also, it is regularly prescribed for individuals with bipolar disorder.)
And they readily reported that, yes indeed, my son DOES have a mood disorder on top of the autism and the Tourettes.
"Well," I said aloud, "it's good to know that the Depakote was helping."  What I sang in my mind was, told ya so, told ya so, nanny nanny boo boo. Ppppttttthhhh.
I really shouldn't be so mean spirited about it.  This is their job, to manipulate the medication and figure out what's working, what's not, and to parse out what is behavioral and what is medical. If they weren’t changing things around, I think I’d be pretty disappointed.
And they are willing to listen to our ideas about new medications and therapies to try.  It’s nice because it means a lot of research on their end and I’m glad they’re willing to put the time and effort into helping Conor.
It's just that I've felt for the past year that no one believed us when we said Conor was acting crazy at the beginning of all this nonsense a year and a half ago. (Has it only been that long? Feels like forever.)
People listened, doctors nodded, assistants took notes, and everyone was quite polite.
No, no, really, I would say, his behavior was just… crazy.  He’d tantrum for no reason at all, and he wouldn’t stop even if you gave him everything he wanted.  (This would last for days. Not minutes, not hours… days.)
But I still felt like they might be thinking...this kid is just so spoiled. Because the Depakote took the crazy away and left us with the learned behaviors.
I'm not being fair.  I know I’m not.  I’m just being crabby and petty because I have a mini-hangover today, and now I have to truly come to terms with the fact that my son not only has a severe developmental disability and a tic disorder, he also has a budding mental illness.  (I was half-hoping they’d tell me the mood disorder thing was a mistake.)
As if any one of the three wouldn’t be difficult enough, in and of itself.
I guess it’s nice that it’s confirmed.  Not just a working theory. Maybe now we can figure out what to do to help my son cope with his three diagnoses.
Really, does my son really have autism, Tourettes and a mood disorder?  Really? Really?
Well, it may be ugly when they bring crazy back, but it’s hot when Justin Timberlake brought sexy back.
Ok, it’s a bit of a stretch but I couldn’t resist; he’s so cute and it's an excuse to watch the video! Ready ladies?