The Artist Currently Known As Conor

Art plays an integral role in Conor’s life.  This is of his choosing, but I won’t deny giving him every opportunity to express himself through art.  I’m hoping, I suppose, that he’ll give me some insight into his inner world through his artistic expressions.

It obsesses me, trying to figure out what’s going on in that mis-connected brain of my son. I’m continually searching for the why of Conor’s behavior. There are often no answers, even from the professionals. He can’t tell me the why with his words. So I turn to his art.

Conor shuns drawing.  He’s passionate about mixed media, sculpture and clay, with a fascination for architecture and large-scale projects.  This passion keeps his art therapist challenged.  Together, they’ve made a row house (complete with electricity), a museum, a fish aquarium, a shopping mall, and are currently working on an airport.

Yes, you heard me correctly, an airport, complete with escalator, a people-mover, baggage claim, one plane, a bowling alley, a vending machine with drinks AND food, and 485 stores.  Among other things. We’re busy talking him down from the 485 stores because my house just isn’t that big.

I can’t say that all of Conor’s art is fine art and works of sculpture.  Sometimes it’s just an itch he needs to scratch.  He goes to a paint-your-own-pottery place and paints soap dispensers, salt-and-pepper shakers, figurines, Christmas ornaments, spoon holders, and planters.  But these things seem almost slap-and-dash, where the doing is more important than the final product. Although they are no less dear to him. 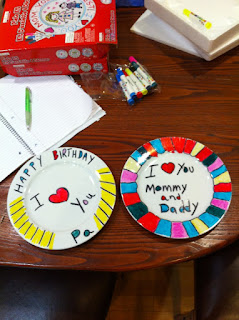 And, of course, there are the birdhouses and decorative plates.  He tries to copy the pictures on the boxes, down to the I Love You Mommy and Daddy and the Happy Birthday messages.  I want to believe he means these words, even though he isn’t original in the design and words.


Maybe it’s just easier to copy something that expresses his thoughts rather than trying to express them in his own words, since words fail him so often.

Perhaps it's futile, my attempts to glean something from Conor’s works of art. Without his interpretation and direction, it may be fruitless.  But I’ll keep trying.  And I’m sure he’ll keep creating.


In his own words and voice, Conor explains his Dinosaur Museum. Despite having some behavioral challenges during the late winter/easrly spring of 2010, he was not on an anti-psychotic here, which explains his slender physique.  (Behaviors started up again in October 2010.) He was 11 years old in August 2010. I'm not sure if I shared this before, but in any case, enjoy.