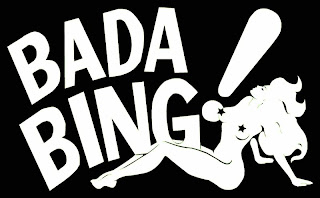 Aidan, my 10 year-old typical kid, and I jetted down to Duck Key, Florida, this past week for a little respite on his Spring Break. Friends of ours spend a week at a resort there, and I just latch on to their vacation plans like a leech each year.

(Hey, what can I say? They're of Irish descent, and Aidan has red hair and freckles.  I just push him in the door of their rental house and figure they'll never notice they've got a fifth kid at the beach. I got to read two books before they even realized he was there.)

Duck Key is far to go for just four days, but I love these mini-vacations. It gives me enough time to disconnect from all the demands of parenting Conor and really enjoy concentrated time with Aidan.

After a two hour flight to Miami, we had a 100 mile commute to the Florida Keys. This gave us much needed quality time.

"Mom, why does that sign say 'Gentleman's Club' but has a picture of a lady on it?" Aidan inquired, looking at me rather quizzically.

I glanced at him quickly. Damn. Aidan, sitting in the passenger seat next to me, screwed his face up like he just ate a lemon. "I don't think I'd like that," he continued. He's currently mortified by anyone's nakedness, including his own.

"Wait until you're older.  I'm bettin' you change your mind," I countered.

"Does Dad go to those places?" he continued.


((Who the hell taught this kid to talk?!? And why isn't he playing on his iPhone?))

"Only with skanky clients twenty-five years ago," I replied.

No! Not really.  That's just what I thought.  What I really said was--

"You'll have to have that discussion with your father."

(Programming note:  my husband does not frequent strip clubs. What can I say?
I was like a deer in the headlights. I wanted to lob that hot one in my husband's side of the court tout-de-suite!)
See?  Quality time.

("The answer is NO!, Alisa," my friend laughed when I arrived and told her the story about the Gentleman's Club questions. "Just...No!" Damn, I always get the answers wrong to word problems.)


Getting Conor prepared for the disappearance of his mom and brother for four days took some finagling. I made sure we went during school days so his schedule remained structured. (My boys are in two separate school systems, so they have totally separate spring breaks. It works quite well for us.) I made sure all Conor's favorite foods were stocked up in the house so my husband wasn't caught off guard by a lack of inventory.  I forbade all of Conor's aids, therapists, and school personnel from getting sick or having a car breakdown for that week or otherwise having a life.

Ok, ok, I forgot to leave the check for Conor's art therapist but she was cool with it. She said she might come back.  Maybe.

It doesn't matter.  Conor wound up having a tantrum the day before, threw up the morning we left, and missed school that first day.


Sorry, honey, gotta go!  Don't want to miss my flight!
﻿
Here's a copy of the social story I put together for Conor. (I saved the PowerPoint file as a movie, so I apologize for any technical issues. I'm pretty hopeless at these things.) I really emphasized staying on Level Three during my absence. He still screws up his pronouns so writing things in his voice--in a way he can understand things--can be tricky.

The day after Aidan and I returned from our respite, Conor had another tantrum, this time at school. Looks like we were back in the thick of things.

That's ok, though.  Aidan's back in school (finally! my God, fourteen days is forever) and preparing for the highlight of his fourth grade year--the PUBERTY and SEXUALITY unit. The way I see it, our little trip past the Gentleman's Club was a great start to his learning all about human sexuality, reproduction, and character development. I'm just a little ahead of the game. You know, because of all of our quality time.

It is amazing the work we do to leave for a few days. I never really considered how much till I read this. It is different looking on the outside in.. Thanks for sharing..