Conor's recently rediscovered the black box activity "Let's Cook Something Fun!" and, man, he is on a tear.  Yesterday, he and Paisely (his respite care aid) made a yellow cake for my husband, since his birthday is coming up. 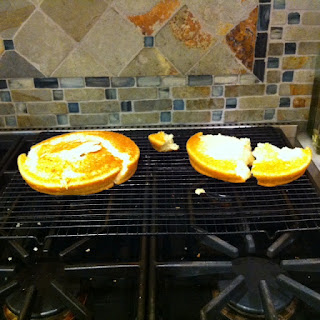 Conor's actually quite a good chef, so don't blame him for the state of the cake.  And though poor Paisley can't cook a lick, it's really not her fault either. My oven is on the fritz and I'm refusing to get it fixed because it's only 3 years old.  It's the principle of the thing, you know?

Three year-old ovens are NOT supposed to break, especially after the two year-old microwave was just replaced.

If you are the parent of a child with autism, appliances should never break, no one should ever get sick, school should be in session every day, the car will always, always start, and the power should never EVER go out.

Besides, we have another oven.  Of course, Conor won't use the other oven.  I tell you, these chefs are so particular.


On the positive side, when Conor saw his cake in tatters, he did not have a tantrum.  He agreed, we all agreed really, that Betty Crocker buttercream frosting could be the glue that would hold all the pieces together. (It certainly binds him up enough.)

All those holes in the cake meant more room for more frosting!  Whoopee!

Honestly, I can't believe Conor bought it.  This is true progress, people!  A year ago, this would have resulted in a grand mal tantrum of epic proportions.  At the minimum, he would have insisted that we make another cake.

Today, he said "meh".  Well, technically he didn't say "meh", but he had a "meh" attitude.  Which I think is sort of like zen, but Yiddish.

No matter.  I give myself a lot of credit for Conor's love of the culinary arts.  After all, we used to watch Emeril every night before he went to bed.  Ok, fine, I let him watch Emeril until he fell asleep, at which point I transferred him to his bed.  Whatever, it was easier.  Easier than sitting in the hall for two hours while he jumped in and out of bed like some cockamamie jack-in-the-box.

At one point, we watched so much Emeril that when we made homemade spaghetti sauce together, Conor would throw in the basil and yell loudly--"kick it up a notch!" 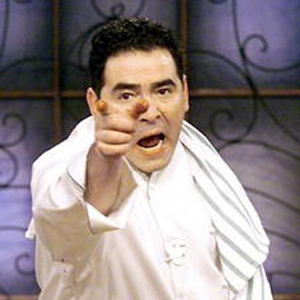 I totally should have had the Emeril show come to our house and tape Conor making his sauce.  A star would have been born.

Aw, shoulda coulda woulda.  Anyway, Conor does cook but he does NOT clean.  And all this cleaning up after my little Top Chef has my hands as chapped as a scullery maid's.  That stepchild Cinderella ain't got nuthin' on me 'cause I'm doing dishes all. day. long.

I know, I know, I should teach him to do the cleaning up as well.  And one day I'll get there. One day, Conor will cook me fennel-crusted pork loin with fingerling potatoes and roasted pears, and once he finishes serving it? Well, since he won't dare eat such drivel, he can make himself useful cleaning while he waits for the espresso machine to heat up adequately.

Oh, did I mention that he makes a mean espresso?
Posted by Alisa Rock at 9:44 PM