At 10:45pm last night, as I bent over our dinky laminator with a pair of metal scissors trying to get the crinkled-up piece of plastic paper out of it, I finally realized why elementary school teachers work so much overtime.
Stupid laminators.  They suck.

Because of Conor's disability, we use visual schedules, calendars, tokens, and various other aids to try to communicate with him and to help minimize the upsets that can lead to a tantrum. Even though he's pretty verbal, communication is still an incredible challenge.

So, ages ago, I purchased a cheap-ass reasonably priced personal-size laminator to help prolong the life of the visual aid.

(Man, the laminator wasn't expensive but boy, do they gouge you on those sheets you need.  You know, the actual plastic thingies?  Holy Mary, I'm gonna get into that racket.)

So there I was, risking electrocution so that I could print out tokens for Conor's newest visual aid.  Sure, everybody else in Charm City got to drink beer and watch the Orioles take on the Yankees in Baltimore's first playoff game in, like, forever.

But me? Noooooooo.  Gotta laminate.

Ok, here's the deal.  Conor started getting reeeeeaaaaallllyyyy upset about breakfast options.  He didn't want any.  Options, that is.  Waffles.  Waffles, waffles, waffles and more waffles. We've been down that road before.  Not going to do that again. Getting stuck in the food rut will backfire on us in a bad way. But trying to get him to change to a different food caused upsets three mornings in a row.

There is nothing more painful than trying to deal with challenging behavior before you've even gotten to eat your gluten-free Rice Krispies and have that much-needed second cup of coffee.

The way I figured it, we'd narrow the fight down to only once a week.  Each Friday, Conor would pick out the breakfast choices for the next seven days.  That way, when he clomps down the wooden stairs in my clogs (that's a topic for another post), there's no discussion.  We look at the board and he eats what he chose on Friday.

That's the idea, anyway. I printed out and laminated some breakfast choice tokens.  To make it easier, I color-coded them.


Ok, I color-coded them because I am a big dork.  So there.


I made up a board for the tokens and voilà! We have our Breakfast board. 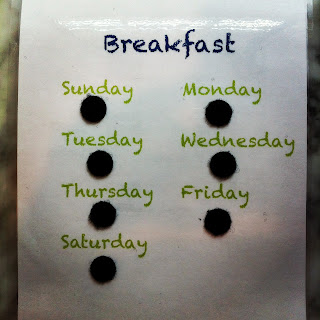 I anticipated a bit of a ruckus.  To be honest, I pictured days of teeth-gnashing and caterwauling as Conor realized my husband and I were serious about this new procedure.

Nope.  Not a blink of an eye. Nothing. Da nada. So unlike my son. (Has anyone seen Conor?)  So now, breakfast is easy-peasy, no quarrels, no fusses, no musses.

Conor starts getting jacked up because I've denied a request for french fries.  Well, he was getting jacked up for a number of reasons (which I'll go into in yet another post, I suppose).  So his behaviorist thinks it might help to have the same type of schedule since breakfast went so well.

And thus, there I was.  Hunched over the laminator trying to pry out the stupid crinkled-up plastic-coated paper jammed in there.  Here's what I eventually came up with---

But... this time, I decided to get a little artistic with the board.  Why be boring when you can add a little somethin' somethin', know what I mean? 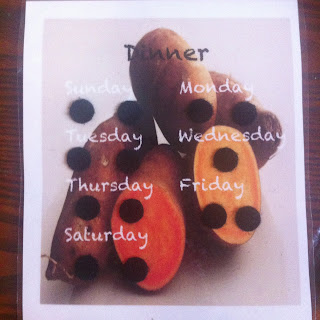 I'm skeptical that this is going to eliminate the fights over food.  It's been an ongoing theme since he regressed.  Plus, Conor has now learned the difference between "snack" and "dinner".  As in--

"You can have french fries with dinner, but you can't have a baked potato then," I reply.

"No, Conor.  You can only have two for dinner."

"No, Conor.  You can have french fries for dinner, if you want, but then you can't have the baked potato."


Oh, for Pete's sake.  Looks like I'm heading back to the laminator for a "snack" board and tokens.  That's why they call me... The Laminator!
Posted by Alisa Rock at 8:49 PM